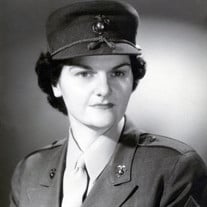 Mrs. Annie Mae Williams Wilson, age 90 of Rockmart passed away Wednesday morning, November 14, 2018. Mrs. Wilson was born December 5, 1927 in Rockmart, daughter of the late W. O. (Bill) Williams and the late Tevis Hulsey Williams. She was a member of the First United Methodist Church of Rockmart. Mrs. Wilson was a graduate of the Rockmart High School Class of 1945 and attended both Berry College and Georgia State College. Mrs. Wilson joined the United States Marine Corp during the Korean Conflict. She retired from the Civil Service with 21 years of service as a computer technician having worked at various facilities. She made her home in East Point, Georgia, where she raised her son, Peter, before moving to Rockmart in the early 1980’s. In addition to her parents, she was preceded in death by six sisters and seven brothers. Survivors include a son and daughter-in-law, Peter and Darlene Wilson of Powder Springs; two grandsons, Matthew Wilson and his wife Robin of Douglasville and Phillip Wilson and his wife Karlie of Birmingham, AL; four great-grandchildren, Everett Wilson, Hudson Wilson, Wynn Wilson and Hadley Wilson. Funeral graveside and interment services for Mrs. Wilson will be held on Friday, November 16, 2018 at 2:00 p.m. in the family lot of Rose Hill Cemetery with Rev. Martha Dye officiating. Brown-Wright American Legion Post #12 Honor Guard will be in charge of the military graveside rites. The following gentlemen will serve as pallbearers: Matthew Wilson, Phillip Wilson, Ronnie Williams, Larry Williams, Josh Williams and Stan Barker. The family will receive friends at the funeral home on Friday prior to the funeral service from 12 noon until 1:30 p.m. Floral donations will be accepted or those wishing to do so, may make memorial contributions to the First United Methodist Church, P. O. Box 152, Rockmart, GA 30153 in memory of Mrs. Wilson. Freeman Harris Funeral Home is in charge of the funeral graveside service for Mrs. Annie Mae Williams Wilson.

The family of Mrs. Annie Mae Williams Wilson created this Life Tributes page to make it easy to share your memories.