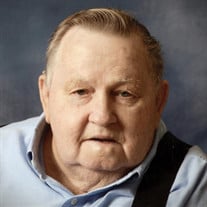 Mr. Billy “Tank” Lumpkin, age 80 of Rockmart passed away Saturday evening, May 26, 2018. Mr. Lumpkin was born February 7, 1938 in Rome, son of the late Charner Allen Lumpkin and the late Sarah Francis Jamison Lumpkin. He was a graduate of the Rockmart High School Class of 1956. Mr. Lumpkin retired from the Lockheed-Martin Corporation with 38 years of service and was of the Baptist faith. He was a member of the Rockmart Masonic Lodge #97 F&AM where he was a Past Master and had served in many capacities in the masonic order. In addition to his parents, he was preceded in death by a sister, Margaret Lumpkin Jennings; and four brothers, Allen Lumpkin, Van Lumpkin, Bobby Lumpkin and Harold Lumpkin. Survivors include his wife, Bobbie Irwin Lumpkin of Rockmart to whom he was married March 1, 1958; two sons and a daughter-in-law, Rick Lumpkin and Mark and Dena Lumpkin all of Rockmart; two sisters and brothers-in-law, Hazel and Paul Bolstein of Powder Springs and Carolyn and Randy Stone of Rockmart; brother and sister-in-law, Jerry and Shirley Lumpkin of Griffin; and a grandson, Andrew Lumpkin. Funeral services for Mr. Lumpkin will be held on Wednesday, May 30, 2018 at 11:00 a.m. in the chapel of the Freeman Harris Funeral Home with Rev. Josh James and Rev. Owen (Bud) Davis, Jr. officiating. Interment services will follow in the family lot of Rose Hill Cemetery with Rev. Jeff Hulsey officiating. Serving as pallbearers: Paul Smith, Chuck Lumpkin, Charlie Lumpkin, Wade Stringer, Steve Lumpkin and Cleve Lumpkin. Honorary pallbearers will be: Dan Forsyth and Earl Deaton. The family will receive friends at the funeral home on Tuesday evening, May 29, 2018 between the hours of 6:00 and 8:00 p.m. Freeman Harris Funeral Home is in charge of the funeral services for Mr. Billy “Tank” Lumpkin.

The family of Mr. Billy "Tank" Lumpkin created this Life Tributes page to make it easy to share your memories.

Send flowers to the Lumpkin family.