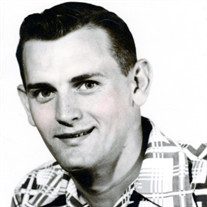 Mr. William Harris “Billy” Williams, age 82 of Taylorsville, Georgia passed away Saturday, September 5, 2015. Mr. Williams was born September 8, 1932 in Taylorsville, son of the late Samuel “Bud” York Williams and the late Callie Mae Harris Williams. He was a member of the Floyd Creek Baptist Church and a self-employed farmer. Mr. Williams was a veteran of the United States Army having served during the Korean Conflict. He loved being outdoors, especially fishing and farming but his greatest love was his home. Mr. Williams was preceded in death by a sister, Mrs. Rachel Haynes. Survivors include a daughter and son-in-law, Joy and Frank Chastain of Taylorsville; sister, Frances Cagle of Taylorsville; two grandchildren, Brooke Chastain and Will Chastain; nieces and nephews also survive. Funeral services for Mr. Williams will be held on Wednesday, September 9th at 4:00 p.m. in the chapel of the Freeman Harris Funeral Home with Rev. Andy Fennell officiating. Interment services will follow in the family lot of the Floyd Creek Baptist Church Cemetery with presentation of the US Flag and Taps provided by the Brown-Wright American Legion Post #12 Honor Guard. The family will receive friends at the funeral home on Wednesday prior to the service between the hours of 2:00 and 3:30 p.m. The following gentlemen will serve as pallbearers: Tom Haynes Jr., Bill Haynes, Mike Shanks, Kevin Abernathy, Todd Carlton, Barry Jackson, Ronnie Sutton and Ray Bradley. Honorary pallbearers will be Tom Haynes, Sr., Wyatt Phillips and Melvin Scott. Freeman Harris Funeral Home is in charge of the funeral services for Mr. William Harris “Billy” Williams.

The family of Mr. Billy Williams created this Life Tributes page to make it easy to share your memories.

Send flowers to the Williams family.