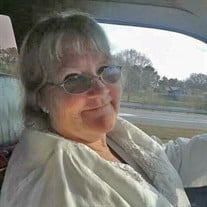 Mrs. Bobbie Jo Cook Swift, age 63 of Rockmart passed away Sunday, January 21, 2018. Mrs. Swift was born October 31, 1954 in Cedartown, daughter of the late William Lathiel Cook, Sr. and the late Helen Ruth Landers Cook. She was of the Baptist faith and a graduate of Cedartown High School. Mrs. Swift was an employee of Sleep Inn & Suites of Cartersville. She had a great love for her family, her grandkids and great-grandbaby being her life. In addition to her parents, she was preceded in death by a sister, Mary Cook Stevens; and a brother-in-law, Roy Wolfe. Survivors include two daughters, Christy Swift of Cartersville and Heather Swift of Rockmart; two sisters, Marion Wolfe of Orlando, FL and Donna (Phil) Colbert of Ocala, FL; three brothers, William L. (Jeanette) Cook, Jr. of Cartersville, David (Wanda) Cook and Winston (Brenda) Cook all of Cedartown; six grandchildren, one great-grandchild and numerous nieces and nephews. Funeral graveside and interment services for Mrs. Swift will be held on Thursday, January 25, 2018 at 2:00 p.m. in the family lot of the Greenwood Cemetery of Cedartown with Rev. David Burchfield officiating. The following gentlemen will serve as pallbearers: Landon Griffin, Camron Cook, Dustin Thaxton, Jamie Cook, Jeff Cook and Roger Barber. The family will receive friends at the funeral home on Thursday prior to the graveside service between the hours of 10:00 a.m. and 1:00 p.m. Freeman Harris Funeral Home is in charge of the funeral graveside service for Mrs. Bobbie Jo Cook Swift.

The family of Mrs. Bobbie Jo Cook Swift created this Life Tributes page to make it easy to share your memories.

Send flowers to the Swift family.