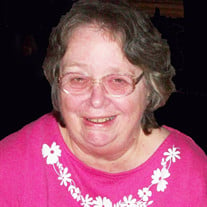 Mrs. Brenda Fay Tucker Coker, age 70 of Rockmart, Georgia passed away Friday, March 17, 2017. Mrs. Coker was born August 13, 1946 in Rome, Georgia, daughter of the late Nancy Helen Odom Tucker and the late William M. Tucker. She was a member of the New Prospect Baptist Church and graduated from Piedmont High School, Class of 1964. Prior to retirement, Mrs. Coker was employed with the Murata Corporation. She had a great love for family and the grandchildren were a special love. She also enjoyed cooking, reading and crocheting. She was preceded in death by a daughter, Johnnie Lorraine Coker Riley in 2002; and a sister, Nadine Tucker Surrett. Mrs. Coker is survived by her husband of fifty-one years, Mr. Johnny Coker of Rockmart; two daughters, Mrs. Jennifer Coker Bentley and her husband Adam of Rockmart and Mrs. Jaclyn Yvonne Coker Myrick and her husband Corey of Cedartown; six grandchildren, Zachary Parish, Michael Bentley, Megan Bentley, Faith Cheeks, Andrew Cheeks, and Braci Myrick; a nephew, Jeremy Tucker and his wife Debbie of Tallapoosa. The family will receive friends at the funeral home on Monday, March 20, 2017 between the hours of 6:00 and 9:00 p.m. A memorial service for Mrs. Coker will be held in the chapel of the Freeman Harris Funeral Home at 2:00 p.m. on Tuesday March 21, 2017 with Rev. Larry Davis and the Rev. Owen (Bud) Davis, Jr. officiating. The family requests in lieu of flowers that those wishing to do so, may make memorial contributions in memory of Mrs. Coker to: Heyman Hospice, 420 E. Second Ave., Rome, Ga 30161. The following gentlemen have been asked to serve as honorary pallbearers: Larry Cole, Keith Cole, Danny Cole, Chris Cole, and Chad Cole. Freeman Harris Funeral Home is in charge of the memorial services for Mrs. Brenda Fay Tucker Coker.

The family of Mrs. Brenda Fay Tucker Coker created this Life Tributes page to make it easy to share your memories.