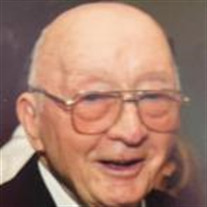 Mr. Buell Ingram, age 97 of Rockmart, passed away Wednesday afternoon, February 10, 2021 at Redmond Regional Medical Center. Mr. Ingram was born March 17, 1923 in Rockmart, son of the late William D. Ingram and the late Blonnie King Ingram. A 1947 graduate of Rockmart High School, he served in the United States Navy during WWII on the U.S.S. WASP. He was an attorney and a member of the Georgia Bar. His lifelong career was with General Motors in Doraville, GA. He had been a member of the American Legion Brown-Wright Post #12 since 1946. In 1949, he joined the Rockmart Masonic Lodge #97, becoming a Master Mason on April 6, 1950 and a 70-year Mason on June 6, 2020. He was a member of Piedmont Avenue Baptist Church in Rockmart. In addition to his parents, he was preceded in death by his wife, whom he married in 1954, Mrs. Genevieve Gates Ingram on February 17, 2001; a son, Glenn Ingram; a son-in-law, Larry Pruitte; and siblings, Gertrude Ingram, Raymond Ingram, Forrest Ingram, Velma “Dot” Hastings, Reece Ingram, David Donald Ingram, Margie Sloan and Harold Ingram. He is survived by four children, Susan Pruitte, Cindy Sproull (Kirt), Sam Ingram, and Becky Hall; a sister, Ann Hutcheson; five grandchildren, Brandon Ingram, Dae Brumbelow (Joseph), Bridget Hall, Rena Drummond (Dennis), and Tara Bailey (Jake); seven great-grandchildren, Benji Drummond, Joeby Brumbelow, Dylan Hall, Mary Grace “Smiley Joy” Drummond, Maylin Bailey, Brinley Brumbelow, and Blaize Bailey; and numerous nieces and nephews. “Mr. Buell Ingram, or “Pop Bull” as his children, grandchildren, and great-grandchildren called him, was special. He was the best gardener in the world. He grew the finest tomatoes and shared them with many others. Each year Susan made him promise her that she would get his first “real” tomato. His grape orchard at his farm in Antioch was the best. He loved his farm, which was often referred to as “God’s Country” and his lake where many fishermen spent some of their happiest moments catching until dark. He and Sam traveled to many cattle auctions and Dae, Rena, Bridget, and Tara loved those baby cows growing up in their childhood. “Pop Bull” loved to visit Cave Spring to fill his jugs with the best water and talk to those who gathered there. The last visit in the late summer of 2018, Susan, Rena, Benji, and Mary Grace filled 58 gallons of water for him as he sat on the bench supervising. His great-grandchildren were his world. He was devastated when Maylin had liver cancer and rejoiced when she received a transplant at six months. Blaize shares his St. Patrick’s Day birthday. He loved hearing about Benji’s football games, Mary Grace’s basketball games, Joeby’s wrestling matches and baseball games, and Brinley’s softball games. He told them to always put Jesus first and was so blessed to witness Benji, Mary Grace, and Joeby accept the Lord and be baptized. He appointed Mary Grace, whom he called “Smiley Joy,” at birth to always be his nurse. On Wednesday, February 10th he went to see Jesus in what was a great “going to Heaven celebration.” “Pop Bull” will be missed by all who knew and loved him.” Funeral services for Mr. Ingram will be conducted Sunday, February 14, 2021 at 2:00 P.M. from the chapel of the Freeman Harris Funeral Home with Rev. Joey Davidson officiating. Interment will follow in the Rose Hill Cemetery with Military Honors provided by the American Legion Brown-Wright Post #12 Honor Guard. Pallbearers: Steve Arrington, Jeff Austin, Jake Bailey, Joeby Brumbelow, Joseph Brumbelow, Chad Carlton, Benji Drummond, Dr. Dennis Drummond, Eddie Goss, Rick Hastings, Chris Ingram, Don Payne and Tony Waits. Honorary pallbearers will be members of the Rockmart Masonic Lodge #97. The family will receive friends at Freeman Harris Funeral Home Sunday, February 14, 2021 from 12:30 P.M. until 2:00 P.M. Due to the current COVID-19 regulations, our staff is committed to taking care of our guests and families we serve. All current CDC guidelines will be observed and the family requests that all visitors wear masks. Freeman Harris Funeral Home is in charge of the funeral arrangements for Mr. Buell Ingram.

The family of Mr. Buell Vernon Ingram created this Life Tributes page to make it easy to share your memories.

Send flowers to the Ingram family.