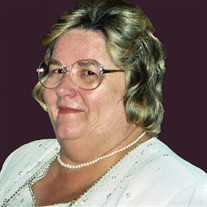 Mrs. Carelene Morris Griffin, age 70 of Rome passed away Thursday evening, October 19, 2017. Mrs. Griffin was born February 16, 1947 in Rockmart, daughter of the late James Floyd “Shorty” Morris and the late Martha Grace Mosley Morris. She was a homemaker and a member of the Canaanland Baptist Church of Rome. Mrs. Griffin had a great love of family and dedication to church and bible study. She enjoyed crocheting, having won many ribbons for her handiwork. In addition to her parents, she was preceded in death by a brother, Robert Harvey Morris; and a great-grandson, Kyle Griffin. Survivors include her husband, Rev. LaMahta Griffin of Rome to whom she was married August 23, 1993; son, Phillip Blissitt of Rockmart; three daughters and sons-in-law, Leighanna and Terry Mann of Rome, Donna Nell and Jeff Cook of Rockmart and Joan and Carlos Cubis of Raleigh, North Carolina; three brothers, Larry Morris and his wife Susan and Donald Morris and his wife Robin all of Rockmart and Keith Morris of Nashville, Tennessee; seven grandchildren and four great-grandchildren also survive. A celebration of life for Mrs. Griffin will be held on Tuesday evening, October 24, 2017 at 7:00 p.m. in the chapel of the Freeman Harris Funeral Home with Rev. LaMahta Griffin officiating. The family will receive friends at the funeral home on Tuesday prior to the memorial service between the hours of 5:00 and 6:30 p.m. Grandsons will serve as honorary pallbearers: Casey Childers, Chris Childers, Eddie Baker and Randy Cook. In lieu of flowers, those wishing to do so may make memorial contributions to the Alzheimer’s Association, North GA Regional Office, 922 East Morris Street, Dalton GA 30721 or donate online at www.alz.org in memory of Mrs. Griffin. Freeman Harris Funeral Home is in charge of the memorial services for Mrs. Carelene Morris Griffin.

The family of Mrs. Carelene Morris Griffin created this Life Tributes page to make it easy to share your memories.

Send flowers to the Griffin family.