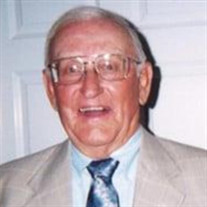 Mr. Charles L. Perry Sr., age 90, of Marietta passed away peacefully Tuesday, October 5, 2021. He was born March 2, 1931, in Clarkdale, Georgia. Charles graduated from South Cobb High School, attended West Georgia College, and took pride playing on their football team. He received his degree from the University of Georgia. He moved to Marietta in 1952 and married Joanne Turner also of Marietta. They have three children: Chuck Perry, Pam Murphy (Tim), and Pattricia Killian and six grandchildren: Amy (Sean) Syck, Laura (Perry) Solem, Anna Perry, Logan (Lorena) Killian, Emily Perry, and Sarah Perry and four great-grandchildren. Charles was a State Farm Agent in Marietta for 38 years and served many clients in our community. Charles, Joanne, and their children attended First United Methodist Church. He moved to his ranch, HAVE NO GOTTA RANCH in Rockmart following the death of his beloved wife and raised Beefmaster Cattle. He attended First Baptist Church of Rockmart regularly following his move. Charles was a man of deep principles and values and exhibited them his entire life. He will be remembered by those who knew him for his faith, his family, and his ranch. The family will receive friends and family on Monday, October 11, 2021 at Mayes Ward-Dobbins Funeral Home at 1:00 p.m. A Memorial Service will follow at 2:00 p.m. also at the Funeral Home. Memorial gifts may be designated to the First Baptist Church of Rockmart, P. O. Box 388, Rockmart, Georgia 30153 for their Playground Restoration Project. Mayes Ward-Dobbins Funeral Home, 180 Church St., NE, Marietta, GA 30060 is in charge of the arrangements for Mr. Charles L. Perry, Sr. This announcement is made on behalf of the family by the Freeman Harris Funeral Home.

The family of Mr. Charles L. Perry, Sr. created this Life Tributes page to make it easy to share your memories.