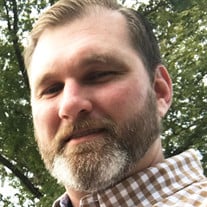 Coach Corey Wayne Godfrey, age 36 of Cartersville formerly of Rockmart and Screven County passed away unexpectedly on Tuesday morning, January 3, 2017. Mr. Godfrey was born June 23, 1980 in Rome, son of Michael Wayne Godfrey and Charlotte Robinson Godfrey. He was a member of the First Baptist Church of Cartersville and a graduate of the Screven County High School Class of 1998. Corey received a Bachelors of Science degree in Technology Education in 2003 from Georgia Southern University and in 2008 earned a Master’s degree in Technology from Lesley University. He recently received an Educational Specialist degree in Educational Leadership from Berry College. After moving back to Rockmart in 1998 his educational career started at Rome Middle School, where he served two years as the technology teacher and coach. For nine years, he was the Engineering and Technology teacher, football and track coach, yearbook advisor and served on other various committees for Rockmart High School. From 2014 until 2016, he was assistant principal at Cedartown Middle School and was currently serving as one of the assistant principals at Rockmart High School and the Polk County College and Career Academy. Corey was also a member of the Aragon Davitte Masonic Lodge No. 513. Corey was accomplished at sports and coaching. He was a strong dedicated individual who loved God and was passionate about being a good role model to those he taught. Survivors include his wife, Christy Carlisle Godfrey of Cartersville to whom he was married June 12, 2004; daughter, Carlisle Hope Godfrey and son, Canaan Wayne Godfrey both of Cartersville; parents, Michael and Charlotte Godfrey of Rockmart; brother, Craig (Katie) Godfrey of Cartersville and niece, Anna; father-in-law and mother-in-law, Randy and Joy Carlisle of Kennesaw; brother-in-law, Jonathan Carlisle; grandparents, Donald and Dorothy Godfrey and Earl Dean and Myrtice Robinson all of Aragon, Nancy L. Smith of Cartersville, Jim and Dyris Cardell of Hendersonville, Tennessee and Gene and Nellie Carlisle of Marietta. Funeral services for Mr. Godfrey will be held on Friday, January 6th at 2:00 p.m. in the First Baptist Church of Cartersville with Rev. Jeremy Morton and Rev. Adam Elrod officiating. Eulogies will be given by Coach Dan Duff and Dr. Jeff Straub. Interment services will follow in the family lot of the Aragon Cemetery with the West Georgia Masonic Memorial Club in charge of masonic graveside rites. Mr. Godfrey will in state at the church on Friday prior to the funeral service from 12 noon until 1:30 p.m. The following gentlemen will serve as pallbearers: Craig Godfrey, Jonathan Carlisle, Matthew Wilson, Mike Wilson, Shane Eubanks, Brian Millsap, Dan Duff and Barry Williams. Serving as honorary pallbearers will be coaches, Joe McCoy, Kent Mathis, Archie Scott, Chuck Thaxton, Doug Mullican, Courtney Hammock, Levi Wigley, Jimmy Easterwood, David Odom, Danny Wiseman, Donnie Brown, Randall Chupp, Adam Blalock, Tivris Dixon, Phil Wood, Charles Smith and RHS coaching staff. The family will receive friends at the First Baptist Church of Cartersville on Thursday evening, January 5th between the hours of 4:00 and 8:00 p.m. In lieu of flowers, the family has requested memorial contributions be made for his children at www.gofundme.com/the-godfrey-family. Freeman Harris Funeral Home is in charge of the funeral services for Mr. Corey Wayne Godfrey.

The family of Mr. Corey Wayne Godfrey created this Life Tributes page to make it easy to share your memories.

Send flowers to the Godfrey family.