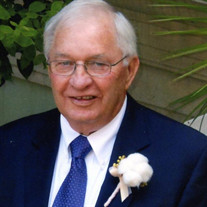 Mr. Daniel Floyd “Dan” Casey, Sr. age 84 of Rockmart passed away Saturday, March 23, 2019. Mr. Casey was born August 13, 1934, son of the late Robert Franklin Casey, Sr. and the late Martha Elizabeth West Casey in Cedartown, Georgia and was raised in the Collard Valley Community. He was a 1952 graduate of Cedartown High School. Dan was a vital member of the community, serving on the Rockmart Hospital Board for many years. He was the owner of the Rockmart Gin Company in downtown Rockmart for 31 years. Mr. Casey served on the board of directors of the Rockmart Bank for over 30 years and served as the Polk County Tax Commissioner for 16 years from 1984-2000. He was a life-long cotton farmer in the Collard Valley area of Polk County. He was a great supporter of the Silver Comet Trail from the very beginning. Dan loved and honored his Heavenly Father, he followed his Savior, Jesus Christ and was used by the Holy Spirit, who lived in his heart, daily. He loved his church, First Baptist Rockmart, where he taught Sunday School and was a Deacon for over 50 years. Many of Rockmart’s teenagers in the 60’s attended his Sunday Night Training Union Class. He never forgot his childhood church home, Collard Valley Baptist Church in Cedartown, GA. His wife Joan and children, Danny, Kay and Carol, were the joy of his life until his grandchildren came along. Matt, Andrew, John and Luke were his boys’, but Sarah was the apple of his eye and Sophia was his buddy. He was loved by all and will be missed beyond words. In addition to his parents, he was preceded in death by his twin sister, Nancy Rose Casey Davis; and three brothers, Robert Franklin Casey, Jr., Fredrick Kendall Casey and William Jefferson Casey. Survivors include his beloved wife of 65 years, Joan Ragan Casey of Rockmart to whom he married December 11, 1953; two daughters, Kay Casey Smith and her husband, Marshall Smith of Villa Rica and Carol Casey Addison and her husband, Barry Addison of Douglasville; son, Daniel Floyd Casey, Jr. and his wife, Beth Gannon Casey of McKinney, Texas; brother, Patrick West Casey and his wife, Louise of Cedartown; five grandchildren, Matthew David Addison and his wife, Danielle O’Toole Addison, John Campbell Addison and his wife, Rebecca O’Neill Addison, Andrew Casey Addison, Sarah Ragan Casey and Luke Gannon Casey; and a great-granddaughter, Sophia Jane Addison. Funeral services for Mr. Casey will be held on Monday March 25, 2019 at 2:00 p.m. in the First Baptist Church of Rockmart with Rev. Jason Odom officiating. Eulogies will be given by Mr. Dan Casey, Jr. and Mr. Matthew Addison and scripture reading by the grandchildren. Interment services will follow in the family lot of Rose Hill Cemetery. His family will also receive friends Monday at the church prior to the service from 1:00 p.m. until the funeral hour. Serving as pallbearers: Roy Cagle, Matthew Addison, Andrew Addison, John Addison, Luke Casey, Glenn Campbell, Ronald Lovell, Buddy Tanner, Ronald Brackett and Allen Bullard. Honorary pallbearers will be: Deacons of the First Baptist Church, Adult 4 Sunday School Class, Jack Ingram and Bobby Woods. The family will receive friends at the funeral home on Sunday, March 24, 2019 between the hours of 6:00 and 8:00 p.m. In lieu of flowers, the family requests donations be made to the “Whole Heart Fund” at First Baptist Church, Rockmart, Georgia. Freeman Harris Funeral Home is in charge of the funeral services for Mr. Daniel Floyd “Dan” Casey, Sr.

The family of Mr. Daniel Floyd "Dan" Casey, Sr. created this Life Tributes page to make it easy to share your memories.