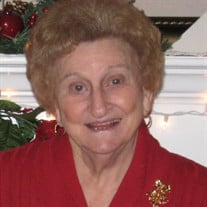 Mrs. Doris Elowese Browning Butler, age 88 of Rockmart, the Beulah Community, passed away Saturday, May 4, 2019. Mrs. Butler was born June 30, 1930 in Rockmart, daughter of the late Claude L. Browning and the late Rilla Sarah Garner Browning. She was a graduate of the Dallas High School Class of 1947-1948. Mrs. Butler was a homemaker and an active member of the Beulahland Baptist Church. She was also a member of the Order of the Eastern Star. Mrs. Butler loved to sing and enjoyed her flowers and working in the garden, but her greatest love was her family. She was preceded in death by her husband, USAF Retired M/Sgt. Gerald M. Butler on April 1, 2002; son-in-law, Gerald Bales; three sisters, Lois Browning, Bernice Carroll and Mildred Shepard; and three brothers, Jodie Browning, Cleve Browning and Donald Browning. Survivors include a daughter, Patrica Butler Bales of Douglasville; sister, Carmon Parks of Marietta; a granddaughter, Jessica Hanson and husband Jeff of Kennesaw; great-granddaughter, Ella Hanson; several nieces and nephews. Funeral services for Mrs. Butler will be held on Tuesday, May 7, 2019 at 2:00 p.m. in the chapel of the Freeman Harris Funeral Home with Rev. Todd Tibbitts and Rev. Randy Clarke officiating. Eulogies will be given by family members. Interment services will follow in the family lot of Beulahland Baptist Church Cemetery. The following gentlemen will serve as pallbearers: Jeff Hanson, Brit Andrews, Dennis Parks, Doug Stell, Todd Tibbitts and Justin Meeks. Honorary pallbearers will be: Kenneth Carroll and Darien Weathington. The family will receive friends at the funeral home on Tuesday prior to the service from 12 noon until 1:30 p.m. Freeman Harris Funeral Home is in charge of the funeral services for Mrs. Doris Elowese Browning Butler.

The family of Mrs. Doris Elowese Butler created this Life Tributes page to make it easy to share your memories.

Send flowers to the Butler family.