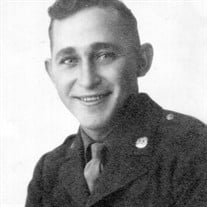 Mr. Ed Coker, age 95 of Cedartown passed away Saturday, October 20, 2018. Mr. Coker was born April 11, 1923, son of the late Charlie Coker and the late Della Wood Coker. He was a veteran of the United States Army proudly serving in World War II and was a member of the Brown-Wright American Legion Post 12. Mr. Coker retired from Southern Railway as a switchman and was a member of the Antioch Baptist Church. He loved serving as a deacon of his church and enjoyed tractors and mechanic work. In addition to his parents, he was preceded in death by his wife, Julia Wright Coker on November 2, 2007; two sisters, Martha Rakestraw and Mable McBride; and four brothers, Charles Coker, JP Coker, Tom Coker and Ralph Coker. Survivors include two daughters, Jackie and Dan Allen and June Hyde and fiancé, Robert Smith all of Cedartown; a brother, Howard Coker of Acworth; three grandchildren, Chad Cowan, Jason Cowan and Cory (Amanda) Roberson; and five great-grandchildren, Jessi Cowan, Chase Cowan, Chandler Cowan, Dedra Roberson, and Alyssa Roberson. Funeral services for Mr. Coker will be held on Tuesday, October 23, 2018 at 2:00 p.m. in the Antioch Baptist Church of Cedartown with Rev. Jonathan Blackmon officiating. A eulogy will be given by Mr. Mark Coker. Interment services will follow in the family lot of the Antioch Baptist Church Cemetery with Brown-Wright American Legion Post 12 Honor Guard in charge of military graveside rites. Mr. Coker will lie in state at the church on Tuesday from 1:00 p.m. until the funeral hour. The following gentleman will serve as pallbearers: Chandler Cowan, Jason Spann, Ronnie Campbell and Randy Grogan. The family will receive friends at the funeral home on Monday evening, October 22, 2018 between the hours of 6:00 and 9:00 p.m. Honorary pallbearers will be members of the Men’s Sunday School Class of Antioch Baptist Church. Freeman Harris Funeral Home is in charge of the funeral services for Mr. Ed Coker.

The family of Mr. Ed Coker created this Life Tributes page to make it easy to share your memories.