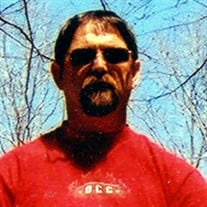 Mr. Eddie Dwain Waters, age 57 of Rockmart passed away Wednesday, September 6, 2017. Mr. Waters was born January 12, 1960 in Floyd County, son of the late Herbert Roy Waters and the late Billy and Betty Jo Pinkard. He was a graduate of the Rockmart High School Class of 1979 and was of the Baptist faith. Eddie had been a tree surgeon for 32 years and had recently started his own tree service and landscaping company. He loved to work, spend time on the farm with his animals and enjoyed camping, but his greatest love was his family and grandchildren. He was preceded in death by a brother, Johnny Waters. Survivors include his wife, Angie Mayfield Waters to whom he was married April 15, 1978; daughter and son-in-law, Crystal and Matt Davis; son, Nicholas Waters; sister and brother-in-law, Patricia and Larry Holcomb all of Rockmart; four grandchildren, Eathyn Davis, Eyn Davis, Cameron Waters and Caydan Waters; half-sisters, Cindy Hutchins, Tammy Oswalt and Pam Hobbs; step-sisters, Darlene Fritz, Dana Pinkard and Tammy Trimm; half-brothers, Randy Waters and Scott Waters; and step-brother, Pete Pinkard. Funeral graveside and interment services for Mr. Waters will be held on Saturday, September 9, 2017 at 2:00 p.m. in the family lot of Piney Woods Baptist Church Cemetery of Buchanan with Rev. Jim "Sonny" Pinkard officiating. The following will serve as pallbearers: Larry Holcomb, Michael Hall, Charles Jacobs, Ricky Amos, Billy Jones and Greg Margelony. Honorary pallbearers will be: David Chittom, Dillard Perkins, Jimbo Cox, Jarried Bogle, George Mayfield and Kaleb Brantley. The family will receive friends at the funeral home on Friday evening, September 8th between the hours of 5:00 and 9:00 p.m. and on Saturday prior to the graveside service from 12 noon until 1:30 p.m. at which time the funeral procession will leave the funeral home going to the cemetery. Freeman Harris Funeral Home is in charge of the funeral graveside service for Mr. Eddie Dwain Waters.

Mr. Eddie Dwain Waters, age 57 of Rockmart passed away Wednesday, September 6, 2017. Mr. Waters was born January 12, 1960 in Floyd County, son of the late Herbert Roy Waters and the late Billy and Betty Jo Pinkard. He was a graduate of the... View Obituary & Service Information

The family of Mr. Eddie Dwain Waters created this Life Tributes page to make it easy to share your memories.

Send flowers to the Waters family.