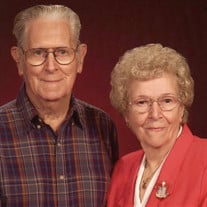 Mrs. Edna Coalson Miller, age 91 of Rockmart, Georgia passed away Wednesday, May 4, 2016. Mrs. Miller was born October 6, 1924 in Paulding County, daughter of the late Rev. Thomas Allen Coalson and the late Janie Elizabeth Whitfield Coalson. She was a member of the First Baptist Church of Rockmart for over 70 years and retired from the Rockmart-Aragon Hospital as a ward clerk. She enjoyed attending the Golden Age Meetings at the church, traveling and just being around people. Mrs. Miller was preceded in death by her husband of 71 years, William (Bill) Miller on August 29, 2014; a grandson, Mike Miller; four brothers and two sisters. Survivors include a daughter and son-in-law, Carol and Benton Gramling of McDonough; two sons and daughters-in-law, Freddy and Ann Miller and Tommy and Mary Lee Miller all of Rockmart; five grandchildren, Steve Gramling, Sandy Asire, Terra Turner, Terry Miller and Kimberly Westbrooks; nine great-grandchildren also survive. Funeral services for Mrs. Miller will be held on Friday, May 6th at 11:00 a.m. in the First Baptist Church with Dr. Greg Thompson officiating. Interment services will follow in the family lot of Rose Hill Cemetery. Mrs. Miller will lie in state at the church prior to the service from 10:00 a.m. until the funeral hour. The following gentlemen will serve as pallbearers: Steve Gramling, Chase Gramling, Ty Gramling, Paul Craighead, Dave Turner and Mike Adkins. Honorary escorts will be members of the First Baptist Church Adult 4 Sunday School Class. The family will receive friends at the funeral home on Thursday evening, May 5th between the hours of 6:00 and 8:00 p.m. Floral donations will be accepted or those wishing to do so, may make memorial contributions to the First Baptist Church, Whole Heart Building Fund, P. O. Box 388, Rockmart, GA 30153 in memory of Mrs. Miller. Freeman Harris Funeral Home is in charge of the funeral arrangements for Mrs. Edna Coalson Miller.

The family of Mrs. Edna Coalson Miller created this Life Tributes page to make it easy to share your memories.

Send flowers to the Miller family.