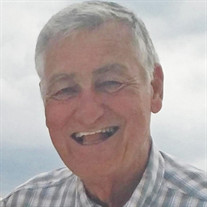 Mr. William Edward “Ed” Roach, age 75 of Aragon, Georgia passed away Sunday, October 18, 2015. Mr. Roach was born on May 21, 1940 in Rockmart, son of the late Sherman William Roach and the late Clara Haney Roach. He was a graduate of the Rockmart High School Class of 1961 and he was a member of the Oak Ridge Baptist Church. Mr. Roach was employed as a street sweeper for the City of Rockmart and he enjoyed deer hunting. He was preceded in death by a sister, Mrs. Libby Hendrix. Survivors include his wife, Shelvie Robinson Roach to whom he married April 19, 1963; a daughter, Rhonda Roach Cook and her husband Ricky of Rockmart; three sisters, Betty Gentry and Joyce Harrell both of Rockmart and Shirley Bearden of Dallas; a brother, Billy Roach of Bremen; three grandchildren, Brittany and Corey Smith and Adam Cook all of Rockmart. Funeral services for Mr. Roach will be held on Wednesday, October 21st at 3:00 p.m. at the Oak Ridge Baptist Church with Rev. Archie Streetman and Rev. Colt Deems officiating. Interment services will follow in the Oak Ridge Baptist Church Cemetery with Rev. Corey Smith officiating. Mr. Roach will lie in state at the church on Wednesday prior to the service between the hours of 2:00 and 3:00 p.m. The following gentlemen have been asked to serve as pallbearers: Chris Hindmon, Labron Cason, Everett Sutton, Olin Streetman, Brent Edwards, Rudy Hindmon, Sonny Hendrix and Timmy Gentry. Honorary pallbearers will be: Bob Gazaway, Fred Osbourne, Sonny Roper, Billy Greeson and Jim Freeman. The family will receive friends at the funeral home on Tuesday evening, October 20th between the hours of 6:00 and 8:00 p.m. Freeman Harris Funeral Home is in charge of the funeral services for Mr. William Edward “Ed” Roach.

The family of Mr. Edward "Ed" Roach created this Life Tributes page to make it easy to share your memories.

Send flowers to the Roach family.