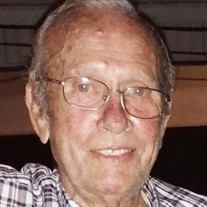 Mr. Edward Lee Nettles, age 84 of Rockmart, passed away Sunday, August 22, 2021. Mr. Nettles was born December 27, 1936 in Rockmart, son of the late Herman Lee Nettles and the late Camilla Thompson Nettles. He was a 1956 graduate of Rockmart High School and a veteran of the United States Air Force having served during the Vietnam War. Mr. Nettles retired from the Lockheed-Martin Corporation with 42 years of service and was of the Baptist faith. He was a member of the Polk County Cattlemen’s Association and enjoyed fishing, dancing, gambling, and traveling. He loved to donate to many organizations and was very well known in the community. In addition to his parents, he was preceded in death by his wife, Glenda Oliver Nettles on June 2, 2018. Survivors include a daughter, Cynthia Denise Harris of Cedartown; brother, Pierce Nettles of Rockmart; uncle, James Nettles of Rockmart; two grandchildren, Gage Harris and Ashleigh Harris both of Yorkville; grandson-in-law, Jason Deering of Yorkville; and three great-grandsons, Jake Harris and Zachary Harris of Taylorsville and Blaze Deering of Yorkville. Funeral services for Mr. Nettles will be held Friday, August 27, 2021 at 2:00 p.m. in the chapel of the Freeman Harris Funeral Home with Rev. Don Rackley officiating. Interment service will follow in Rose Hill Cemetery with American Legion Brown-Wright Post #12 Honor Guard in charge of military graveside rites. The following gentlemen will serve as pallbearers: Jason Deering, Gage Harris, Nicholas Nettles, Perry Nettles, Marty Nettles and Daniel Patterson. Honorary pallbearers will be: Evan Nettles, Derrick Nettles and Nathaniel Patterson. The family will receive family and friends at the funeral home Thursday, August 26, 2021 between the hours of 5:00 and 8:00 p.m. Freeman Harris Funeral Home is in charge of the funeral services for Mr. Edward Lee Nettles.

The family of Mr. Edward Lee Nettles created this Life Tributes page to make it easy to share your memories.

Send flowers to the Nettles family.