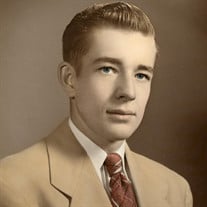 Mr. Emory Speer Hendrix, Jr., age 85 of Columbus, Georgia formerly of Aragon, Georgia passed away Monday, June 13, 2016 at his residence after several years of ill health. Mr. Hendrix was born January 20, 1931 in Aragon, son of the late Emory S. Hendrix, Sr. and the late Myrtle Wright Hendrix. He was also preceded in death by his first wife, Helen Benton Hendrix on April 1, 1977. Mr. Hendrix was a member of the Peachtree United Methodist Church at Peachtree & Dunwoody. He attended school in Aragon and graduated from Rockmart High School in 1948. He was a graduate of Truett McConnell College and continued his college studies at Georgia Tech until he was recruited to work at Lockheed Martin Corporation during the Korean Conflict. After retiring with many years of service from Lockheed, he was employed by Gulfstream Aircraft Company for a number of years. Mr. Hendrix had an outstanding aeronautical engineering career and contributed greatly to the development of the Polaris Missile in California. Survivors include his wife, Rita Sutter Hendrix of Columbus; a son, David Hendrix of Sandy Springs; three step-sons, Scott (Cathie) Drummond of Morgan Hill, California, Jon Sutter of Kissimmee, Florida and Pete (Tammie) Sutter of Columbus; sister, Alicia (Don) Bennett of Rome; two grandchildren, Trip and Tiffany; nieces, Carol (Merrill) Norton and Melody (Carter) Harrison; and nephew, Jason (Jennifer) Bennett. Funeral services for Mr. Hendrix will be held on Friday, June 17th at 1:00 p.m. in the chapel of the Freeman Harris Funeral Home with Dr. Dale Levan officiating. Interment services will follow in the family lot of Rose Hill Cemetery. The family will receive friends at the funeral home on Friday prior to service from 12 noon until the funeral hour. The family has requested no flowers. Those wishing to do so, may make memorial contributions to Columbus Hospice, 7020 Moon Rd., Columbus, GA 31909 in memory of Mr. Hendrix. Freeman Harris Funeral Home is in charge of the funeral arrangements for Mr. Emory S. Hendrix, Jr.

The family of Mr. Emory S. Hendrix, Jr. created this Life Tributes page to make it easy to share your memories.