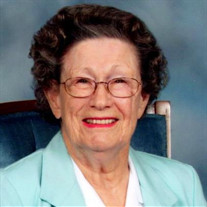 Mrs. Ernestine Davis Hogan, age 94 of Sandy Springs, GA joined family in heaven on Tuesday, October 16, 2018 She was born February 8, 1924 in Taylorsville, GA, daughter of the late Ernest Oliver Davis and the late Lollie Trippe Davis. She graduated with honors from UGA in 1945. She took time off from UGA during WWII to serve her country by working at Bell Bomber Factory in Marietta, GA. After graduation, she moved to Pompano Beach, FL, to teach at Pompano High. In 1948 she married Ponce de Leon Hogan (deceased 1976). Ernestine established Kidde Kollege Day Care & Kindergarten and provided care and education to children in Pompano. After selling her business, she went back to college and received her 6yr Certificate in Chemistry. She then worked in the dietary department at Hollywood Memorial Hospital until she retired at age 70. In 2003 Ernestine was selected to the Broward County Hall of Fame as a Modern Pioneer for being a successful woman entrepreneur at a time when it was uncommon for a woman to own a business, for her care and education for hundreds of children from the working families of Pompano, and her dedication to her patients at the hospital. After a fall in 2002, Ernestine lived the rest of her life in Sandy Springs, GA with her daughter Diane and son-in-law Neil and enjoyed visits with children and grandchildren, and lunch outings with her nephew, nieces and their families. She is survived by daughter, Diane and husband Neil Cunningham; son, Lee Hogan; daughter, Debbie and husband Rusty Toole; daughter, Denise and husband Steve Corry; son, Richard Hogan and wife Patty; nine grandchildren, Jesse, Josh, Ryan, Alison, Emma, Rachel, Jacqueline, Emily, Tyler; and seven great-grandchildren. A celebration of life will be held on Saturday, November 17, 2018 at 2:00p.m. in the Taylorsville Baptist Church with Rev. Parks Davis and Rev. Richard Goodwin officiating. Interment service will follow in the family lot of the Taylorsville Cemetery. In lieu of flowers, donations may be given to First Baptist Church of Pompano Beach, 138 NE 1st Street, Pompano Beach, FL 33060 or Taylorsville Baptist Church, PO Box 220, Taylorsville, GA 30178. Freeman Harris Funeral Home is in charge of the memorial service for Mrs. Ernestine Davis Hogan.

The family of Mrs. Ernestine Davis Hogan created this Life Tributes page to make it easy to share your memories.

Send flowers to the Hogan family.