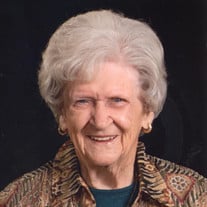 Mrs. Flora Morgan Chandler, age 96 of Aragon, passed away Thursday, June 3, 2021. She was born July 9, 1924 in Rockmart, daughter of the late Mr. Lawrence Morgan and the late Mrs. Louise Clinton White. She retired as a fabricator at Goodyear... View Obituary & Service Information

The family of Mrs. Flora Morgan Chandler created this Life Tributes page to make it easy to share your memories.

Send flowers to the Chandler family.