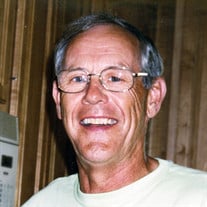 Mr. Guy C. Atkins, age 71, of Rockmart passed away Friday, February 23, 2018 at his home after a long battle with PSP. Mr. Atkins was born March 7, 1946 in Polk County. He was the son of the late Wesley Atkins and the late Lucille Hannah Atkins. He was a graduate of Rockmart High School Class of 1964 and received his Bachelor of Science in Business in 1968 from Shorter College. In 1970, Mr. Atkins and his business partner, Bill Carmichael, opened C&A Auto Parts in Rockmart and remained in business until their retirement in 2009. He was a member and deacon of the First Baptist Church of Rockmart. He had a great love for his family and friends and enjoyed working on old cars, tractors, and around their home. Survivors include his wife, Paula Curenton Atkins, to whom he was married January 27, 1968; two daughters, Stacey Atkins Lovvorn and her husband Ben and Kelley Atkins Pope and her husband Rodney all of Rockmart; two granddaughters, Eisley Pope and Alexa Pope; two sisters, Linda Lee of Cedartown and Alice and Jim Crayton of Zebulon; one brother, Larry and Myrtice Atkins of Piedmont, AL; sister-in-law, Laura Curenton Snow and Darrell of Cedartown; nieces and nephews. Funeral services for Mr. Atkins will be held on Monday, February 26, 2018 at 2:00 p.m. at First Baptist Church of Rockmart with the Reverend Jason Odom officiating. Interment services will follow in the family lot of Polk Memory Gardens. The following gentlemen will serve as pallbearers: Ronald Lovell, Renee Wright, Taylor Hughes, Josh Crayton, Matthew Snow and Michael Lee. Honorary pallbearers will be the Deacons of First Baptist Church of Rockmart, Glenn Campbell and Ronnie Campbell. Mr. Atkins will lie in state at the church on Monday prior to the service from 1:00 p.m. until the funeral hour. The family will receive friends at the funeral home on Sunday, February 25, 2018 from 4:00 – 7:00 p.m. In lieu of flowers, memorial donations may be made to First Baptist Church of Rockmart, P.O. Box 388, Rockmart, GA 30153 Freeman Harris Funeral Home is in charge of the funeral services for Mr. Guy C. Atkins.

Mr. Guy C. Atkins, age 71, of Rockmart passed away Friday, February 23, 2018 at his home after a long battle with PSP. Mr. Atkins was born March 7, 1946 in Polk County. He was the son of the late Wesley Atkins and the late Lucille Hannah... View Obituary & Service Information

The family of Mr. Guy C. Atkins created this Life Tributes page to make it easy to share your memories.

Send flowers to the Atkins family.