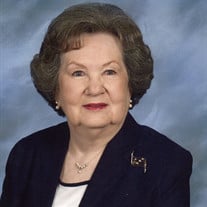 Mrs. Helen Allgood Hurt, age 91, of Rockmart passed away Tuesday, October 31, 2017. Mrs. Hurt was born January 22, 1926, in Rockmart, daughter of the late Thomas Watson Allgood and the late Mattie Belle Crawford Allgood. She was a 1943 graduate of the Rockmart High School and attended Draughons Business College. Mrs. Hurt was the executive secretary to the President of the Marquette Cement Company and served as the City Clerk of Rockmart from 1982-1994. She played piano for high school choral events and later taught lessons at her home. She was a member of First Baptist Church of Rockmart for 64 years and was honored by the church for serving over 50 years as the church pianist. She also taught Sunday School and served on many church committees. In addition to her parents, she was preceded in death by her husband, Harold Moore Hurt, in 1973, son-in-law, Carl Prince, Jr. and grandson, E. Carl Prince, III. Survivors include two daughters, Teresa Hurt Prince Gilson and her husband Lowell of Whitesburg and Sharon Hurt Alexander and her husband Dennis of Calhoun; brother, James Thomas Allgood of Palmetto; three grandchildren, Shannon and Stephen Dann, LTC Kirk and Vanessa Alexander and Wesley and Logan Alexander; granddaughter-in-law, Deborah Prince; and seven great-grandchildren, Sarah and Thomas Dann, Tyler, Ava and Grayson Alexander and Wyatt and Ford Alexander. Funeral services will be held on Saturday, November 4, 2017, at 3:00 p.m. at the First Baptist Church of Rockmart with Rev. David Turner and Rev. Jason Odom officiating. A eulogy will be given by her grandson, Wesley Alexander and the Lord’s Prayer will be sung by her granddaughter, Mrs. Shannon Dann. Interment services will follow in the family lot of Rose Hill Cemetery. The following gentlemen will serve as pallbearers: Billy Ethridge, Cecil Ethridge, Paul Hurt, Tim Hurt and Greg McAlister. The family will receive friends in the Great Room of the First Baptist Church on Saturday, November 4, from 1:00 p.m. until the funeral hour. Floral donations will be accepted, or memorial contributions may be made to the First Baptist Church Music Ministry, P. O. Box 388, Rockmart, GA 30153. Freeman Harris Funeral Home is in charge of the funeral services for Mrs. Helen Allgood Hurt.

The family of Mrs. Helen Allgood Hurt created this Life Tributes page to make it easy to share your memories.

Send flowers to the Hurt family.