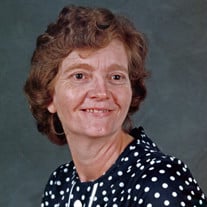 Mrs. Helen Bell Chambers, age 88 of Rockmart, Georgia passed away Thursday evening, May 21, 2015. Mrs. Chambers was born February 23, 1927 in Tallapoosa, Georgia, daughter of the late Willie Bell and the late Dovie Morrow Bell and step-daughter to the late Ruby McCullough Bell. She had lived most of her life in Rockmart and was a longtime member of the Rockmart Church of God. She had a great love for her family and friends and enjoyed spending time with her grandchildren. She was a homemaker and seamstress and enjoyed painting and crafts. She was also an avid doll collector. Mrs. Chambers was preceded in death by her husband, Mr. John Henry “Johnnie” Chambers on November 30, 2008; a brother, Mr. James William “Bud” Bell; and a grandson, Ben Chambers. Survivors include a daughter and son-in-law, Dianne and Forrest Maxwell of Rockmart; a son and daughter-in-law, Ron and Kay Chambers of Cedartown; two grandchildren, Amanda “Mandi” Ingram and her husband Matt of Cedartown and Barry Maxwell of Rockmart; five great-grandchildren, Bonnie Ingram, Will Ingram, Luke Ingram and Rosemary Ingram all of Cedartown and Bethany Maxwell of Villa Rica; and a beloved niece, Trudy “Mousie” Bell McChargue of Columbus also survives. Funeral services for Mrs. Chambers will be held on Sunday, May 24th at 2:00 p.m. in the chapel of the Freeman Harris Funeral Home with Chaplain Jeff Wegner and Rev. Delton Harne officiating. Interment services will follow in the family lot of Rockmart Memorial Gardens. The following gentlemen will serve as pallbearers: Matt Ingram, Kevin Gardner, James Bell, Wesley Bell, Tony Hudgins, and Wayne Hardy. The family will receive friends at the funeral home on Sunday, May 24th prior to the service between the hours of 12:30 and 1:30 p.m. Floral donations will be accepted or those wishing to do so, may make memorial contributions to the Alzheimer’s Association, Georgia Chapter, 922 East Morris St., Dalton GA 30721 in memory of Mrs. Chambers. Freeman Harris Funeral Home is in charge of the funeral services for Mrs. Helen Bell Chambers.

The family of Mrs. Helen Bell Chambers created this Life Tributes page to make it easy to share your memories.

Send flowers to the Chambers family.