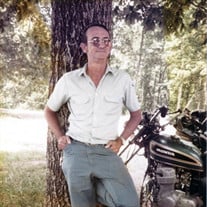 Mr. Herbert Lee Wilson, 85 of Cedartown, passed away peacefully at home on Saturday, July 11, 2020. He was born June 2, 1935 in Rockmart, GA, son of the late Johnny Wilson and Inez Brandon Wilson. On July 23, 1954, he married his wife, Mrs. Joan Bernice Crabb Wilson. The two were married for 65 years and had three sons together. He opened a successful upholstery business, Wilson Upholstery, where he worked for 45 years. He and his family were members of Victory Baptist Church in Rockmart where he served as a deacon. Mr. Wilson was a motorcycle enthusiast who enjoyed traveling wherever he could, including Canada and all 48 continental states. In addition to his parents, Mr. Wilson is preceded in death by a brother, Moses Wilson; and a sister, Julia Wood. He is survived by his wife, Joan Bernice Crabb Wilson; three sons and daughters-in-law: Perry & Kathy Wilson of Cedartown, Brad & Tressie Wilson of Rockmart, and Greg & Connie Wilson of Cedartown; five grandchildren, Heather Fletcher, Paige Purser, Cole Wilson, Lee Wilson, and Montana Wilson; and thirteen great grandchildren. The family will receive friends at Victory Baptist Church on Sunday, July 12, 2020 from 6:00 PM until 9:00 PM. Funeral services will be conducted Monday, July 13, 2020 at 1:00 PM from Victory Baptist Church with Rev. Barry Snapp and Rev. Richard Argo officiating. He will lie in state at the church 12:00 PM from 1:00 PM. Interment will follow in the Bethlehem Cemetery with Rev. Jason Purser officiating. The following gentlemen will serve as pallbearers: Perry Wilson, Brad Wilson, Greg Wilson, Lee Wilson Jr., Cole Wilson, and Lee Fletcher. **Due to COVID restrictions in place, masks are highly suggested and social distancing will be observed** In lieu of flowers, contributions may be made to the Victory Baptist Church Lasting Legacy, 15 Hendrix Road, Rockmart, GA 30153. Freeman Harris Funeral Home is in charge of the arrangements for Mr. Herbert Lee Wilson.

The family of Mr. Herbert Lee Wilson created this Life Tributes page to make it easy to share your memories.