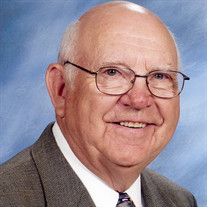 Mr. Horace W. Moon, age 87 of Rockmart passed away Tuesday morning, August 21, 2018. Mr. Moon was born November 4, 1930 in Paulding County, son of the late Marion B. Moon and the late Nettie Brown Moon. He was a 1949 graduate of Dallas High School and retired at the age of 56 from General Motors Corporation with 32 years of service having worked in the material department. Mr. Moon served four years in the United States Air Force during the Korean Conflict where he attained the rank of Staff Sergeant. He was a true patriot and passionate about the military and loved flying the US Flag in his yard. Horace was a former member and deacon of Emmanuel Baptist Church of Riverdale and was presently an active member of the First Baptist Church of Rockmart where he enjoyed the Golden Age Group. He loved the outdoors and was a trail ranger for the Silver Comet Trail. Since retirement, he has been in all 50 states, plus the following countries: England, Australia, New Zealand, Holland, Israel, Mexico and Canada. In addition to his parents, he was preceded in death by a daughter-in-law, Cheryl Moon; sister, Maggie King; and three brothers, Marvin Moon, J. C. Moon and Charles Moon. Survivors include his wife of 63 years, Imogene “Jean” Norris Moon of Rockmart; daughter and son-in-law, Pat and Mark Lusted of Niskayuna, NY; son, Joe Moon of Snellville; sister, Rosie Faye Moon of Rockmart; two grandsons, Ethan Lusted of Niskayuna, NY and Captain Kevin Lusted and his wife Christine of Columbus; nieces and nephews. Funeral services for Mr. Moon will be held on Saturday, August 25, 2018 at 2:00 p.m. in the First Baptist Church of Rockmart with Rev. Jason Odom officiating. Eulogies will be given by Mr. Dan Casey, Mr. Ethan Lusted and Mr. Kevin Lusted. Interment services will follow in the family lot of Rockmart Memorial Gardens with Brown-Wright American Legion Post 12 Honor Guard in charge of military graveside rites. The following gentlemen will serve as pallbearers: Ethan Lusted, Kevin Lusted, Devin Clark, Ryan Miller, Roy Cagle, John Layfield and Josh Mathis. Honorary escorts will be members of the Golden Age Group. The family will receive friends in the Great Room of the First Baptist Church on Saturday prior to the service from 12 noon until the funeral hour. The family requests that in lieu of flowers, memorial donations be made to the Golden Age or the charity of your choice and that you pay it forward by taking time to help someone in need of assistance. Freeman Harris Funeral Home is in charge of the funeral service for Mr. Horace W. Moon.

The family of Mr. Horace W. Moon created this Life Tributes page to make it easy to share your memories.

Send flowers to the Moon family.