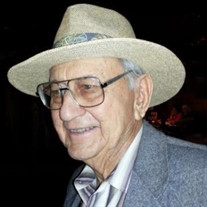 J.D. Griggs was born April 14, 1925 in Cartersville Georgia and passed away Monday, April 13, 2020 at his home in Auburn, California. JD was a strong, selfless, intelligent man, proud of his Southern roots. He graduated from Taylorsville High, and up until seven years ago, attended the class reunions yearly. He was a devoted husband, dad, grandpa, great grandpa, spiritual and professional mentor. From plowing cotton fields in the Deep South, to owning his own construction company (Griggs Corporation) and building over 150 bridges out West, what a life! He loved to tell stories about growing up on the farm and about all of his jobs throughout his life. Moving from Washington to work for Cherf Bros. and Sand Kay, and Lord and Bishop Co, eventually led to him forming a business partnership with Curt Peterson. Together they built the first permanent concrete median in Northern California. From there, he formed his own company, which included joint ventures with Bill Brewer. The biggest job they shared was 17 bridges in Southern California close to the Salton Sea. On our many road trips up and down highways 99 and 5, we heard about jobs from Humboldt County to San Diego County. He was so passionate about his work as a General Contractor. He loved it! Concrete is beautiful! He never gave up on anything or anyone. He helped raise two families. And, as he and his wife Ivanette grew older, the roles in the family totally reversed. It was great to witness such care and devotion he had for her. They were married for over 73 years with no regrets. He was home from the Maritime Academy Grad School when he first saw Ivanette, the girl in the white dress. They were both at a June all-day singing-dinner-on-the-ground at the Cross Roads Baptist Church. But, it wasn’t until about a year and a half later that he actually met her. And, after a four month courtship of movies, dinners out and even an airplane ride they were married in March 1947. He said it was the best decision he ever made. JD was a longtime member of Bell Road Baptist Church in Auburn CA, and was a strong believer! He made several friends there. One friend in particular, David Browning, became JDs breakfast buddy. He so looked forward to their Friday morning get-togethers. JD loved reading the bible, gardening, fishing, hunting, road trips, cornbread and buttermilk, mom’s coconut cake, country music, and John Wayne movies. But, most of all, he loved his family and country! He visited the ill and sat with the dying. He watched out for those that could not take care of themselves. JD was predeceased by his parents, H.J. and Clara Griggs; his daughter, Patty Griggs Topic; granddaughter, Shannon Topic; son-in-law, Bob Troyan; and brother-in-law, Junior Brownlow. Survived by his wife, Ivanette; sister, Sarah Brownlow; brother, James Griggs (Inez); three daughters, Cathlyn Elizabeth Griggs, Pamela Griggs Troyan and Jeanne Odell Griggs; son-in-law, Bob Topic (Mary); 12 grandchildren and 24 great grandchildren, and many nieces and nephews in Georgia and Oregon, all of whom he loved dearly. Due to the pandemic, we must celebrate his amazing life at a later date. Burial will be private. We thank JD’s wonderful care providers and Hospice of the Foothills for their support. Thanks to Chapel of the Hills, Auburn CA, for taking him into their care. Donations can be made online to the Ronald Reagan Presidential Library. Keep it between the ditches Dad! Chapel of the Hills Funeral Home of Auburn, California is in charge of the arrangements. This announcement is made on behalf of the family by the Freeman Harris Funeral Home.

J.D. Griggs was born April 14, 1925 in Cartersville Georgia and passed away Monday, April 13, 2020 at his home in Auburn, California. JD was a strong, selfless, intelligent man, proud of his Southern roots. He graduated from Taylorsville High,... View Obituary & Service Information

The family of Mr. J. D. Griggs created this Life Tributes page to make it easy to share your memories.

Send flowers to the Griggs family.