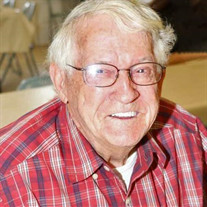 Mr. James Lawrence “J.L.” Jefferson, age 87 of Rockmart passed away Sunday, June 2, 2019. Mr. Jefferson was born November 1, 1931 in Polk County, son of the late William Lawrence Jefferson and the late Vera Chambers Jefferson. He was a veteran of the United States Navy where he served on the USS Philippine Sea during the Korean War. Mr. Jefferson retired from Penske Trucking as a diesel mechanic and was an active member and deacon of the County Line Baptist Church. He was one of the original organizers of the Vinson Mountain Volunteer Fire Department where he served as a volunteer fireman for 40 years. Mr. Jefferson was a devoted husband who loved children, fishing and tinkering. In addition to his parents, he was preceded in death by a daughter, Debra Jefferson Rogers; and two brothers, Billy Jefferson and Rufus Jefferson. Survivors include his wife of 65 years, Velma Hitchcock Jefferson of Rockmart to whom he was married December 24, 1953; two daughters and sons-in-law, Vickie and Rev. Steve Thomas of Rockmart and Myra and Steve Rogers of Lindale; son and daughter-in-law, Ricky and Cathy Jefferson of Hokes Bluff, Alabama; sister, Wilma Bradford of Powder Springs; son-in-law, Kenneth Rogers of Taylorsville; four grandchildren, Danyel (Rodger) Fontenot, Eddie (Jennifer) Thomas, Will Rogers and Selena Rogers; and ten great-grandchildren. Funeral services for Mr. Jefferson will be held on Wednesday, June 5, 2019 at 11:00 a.m. in the County Line Baptist Church with Rev. Steve Thomas and Rev. Kenny Teal officiating. Interment services will follow in the family lot of the church cemetery with Brown-Wright American Legion Post 12 Honor Guard in charge of military graveside rites. Mr. Jefferson will lie in state at the church on Wednesday prior to the service from 10:00 a.m. until the funeral hour. The following gentlemen will serve as pallbearers: Steve Rogers, Will Rogers, Logan Miller, Rodger Fontenot, Billy Hitchcock, Eddie Thomas and Riley Miller. Honorary pallbearers will be the Polk County Volunteer Fire Department and Deacons of County Line Baptist Church. The family will receive friends at the funeral home on Tuesday, June 4, 2019 between the hours of 6:00 and 8:00 p.m. Freeman Harris Funeral Home is in charge of the funeral services for Mr. J. L. Jefferson.

The family of Mr. J. L. Jefferson created this Life Tributes page to make it easy to share your memories.

Send flowers to the Jefferson family.