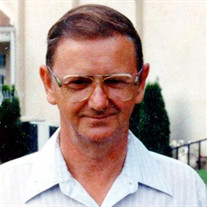 Mr. Jack Arnold Jones, age 76 of Rockmart, Georgia passed away Tuesday morning, June 23, 2015. Mr. Jones was born October 22, 1938 in Polk County, son of the late Troy A. Jones and the late Aileen Cain Jones. He was a member of the Calvary Missionary Baptist Church and was a veteran of the United States Army having served during the Vietnam Era. He retired from both the Union Carbide Corporation of Cartersville and the County Line Baptist Church of Douglasville where he was the church custodian for many years. Mr. Jones enjoyed repairing lawn mowers, fishing and working in the garden. He had a great love for his family and loved to spend time helping other people. Survivors include his wife of 55 years, Merry Lindsey Jones to whom he married May 21, 1960; three sons, Barry (Lisa) Jones and Craig Jones all of Dallas, Georgia and Curtis Jones of Buchanan, Georgia; four brothers, Carl Jones of Davenport, Florida, Bobby (Gail) Jones of Flovilla, Georgia, Bryant (Josie) Jones of Riverview, Florida and Stanley (Jennie) Jones of Sparks, Georgia; eight grandchildren and seven great-grandchildren also survive. Funeral services for Mr. Jones will be held on Friday, June 26th at 2:00 p.m. in the Calvary Missionary Baptist Church with Rev. Hoyt Lewis and Rev. Charles Dyer officiating. Interment services will follow in the family lot of Rockmart Memorial Gardens with Brown-Wright American Legion Post #12 Honor Guard in charge of the military graveside rites. The family will receive friends at the Calvary Missionary Baptist Church on Thursday evening, June 25th between the hours of 6:00 and 8:00 p.m. and again on Friday, June 26th at the church prior to the service between the hours of 12 noon and 1:30 p.m. Floral donations will be accepted or those wishing to do so, may make memorial contributions to the Wounded Warriors Project, 3343 Peachtree Rd. NE, M-20, Atlanta GA 30326 or the Disabled American Veterans, P. O. Box 14301, Cincinnati, Ohio 45250-0301 in memory of Mr. Jones. Freeman Harris Funeral Home is in charge of the funeral services for Mr. Jack Arnold Jones.

Mr. Jack Arnold Jones, age 76 of Rockmart, Georgia passed away Tuesday morning, June 23, 2015. Mr. Jones was born October 22, 1938 in Polk County, son of the late Troy A. Jones and the late Aileen Cain Jones. He was a member of the Calvary... View Obituary & Service Information

The family of Mr. Jack Arnold Jones created this Life Tributes page to make it easy to share your memories.

Send flowers to the Jones family.