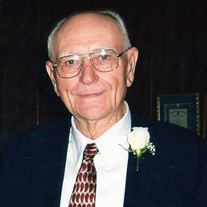 Mr. James Edward “Ed” Rowell, age 96 of Rockmart passed away Saturday, September 24, 2016. Mr. Rowell was born September 15, 1920 in Polk County, son of the late Auguston H. Rowell and the late Frances McMillian Rowell. He was the oldest living member of the Hills Creek Baptist Church, a member of the Rockmart Masonic Lodge #97 where he was a fifty-year mason, a member of the International Brotherhood of Machinists and the Aerospace Workers Union. Mr. Rowell operated Rowell Lumber Company and later retired from the Lockheed-Martin Corporation. After retirement, he spent many years with his wife operating Rowell Antiques in Rockmart. In addition to his parents, he was preceded in death by his wife, Wilma Grogan Rowell on July 19, 2011; and a sister, Lee Emma Rowell Stringer. Survivors include a son, Michael D. Rowell of 116 Rowell Road, Rockmart; daughter, Jimmie Rowell Jones of Cedartown; sister, Edna Rowell Shores of Snellville; grandson, Robert Bradley Jones and his wife Michele and great-grandson, Marshall Robert Jones all of Avondale Estates; several nieces and nephews also survive. Funeral services for Mr. Rowell will be held on Sunday, October 2nd at 3:00 p.m. in the chapel of the Freeman Harris Funeral Home with Rev. Owen (Bud) Davis, Jr. officiating. A eulogy will be given by his grandson, Mr. Robert Bradley Jones. Interment services will follow in the family lot of Polk Memory Gardens with the West Georgia Masonic Memorial Club in charge of Masonic graveside rites. The following gentlemen will serve as pallbearers: Sam Shores, Ray Shores, Donald Wood, Freeman Stringer, Harold McDurmon and Brad Jones. Cousins will serve as honorary pallbearers. The family will receive friends at the funeral home on Sunday prior to the service between the hours of 1:00 and 2:30 p.m. The family has requested that flowers be omitted and memorial contributions be made to the First Baptist Church of Cedartown, Memorial Fund, P. O. Box 720, Cedartown, GA 30125 or to the Rockmart Masonic Lodge #97, P. O. Box 1005, Rockmart, GA 30153 in memory of Mr. Rowell. Freeman Harris Funeral Home is in charge of the funeral services for Mr. James Edward “Ed” Rowell.

The family of Mr. James Edward "Ed" Rowell created this Life Tributes page to make it easy to share your memories.

Send flowers to the Rowell family.