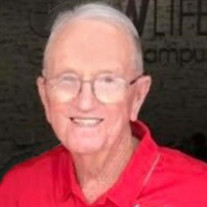 Grovetown, GA – James Thomas “Tom” Gordy, 80, loving husband of 55 years to Edith Wilson Gordy, entered into his eternal rest Friday, December 22, 2017 at his residence. Private graveside services will be held at Westover Memorial Park with Wes McDonald officiating on Tuesday, December 26, 2017 at 11:00 a.m. after which funeral services with Rev. Brian Matthews officiating will be held at 2:00 a.m. in the Gateway New Life Church in Grovetown. The eldest of three boys born to the late Edith Aldridge Screws Gordy and the late James Willard Gordy, Tom was a native of Wadley. After graduating from Wadley High School and, being a patriot, he proudly served his country in the Army. During a visit home with one of his buddies, he met and later married the love of his life. After his stint in the Army, Tom return home and began his career with Southern Railway, which meant that he and his family moved a lot, living in many towns in GA and SC, ending up in Rockmart where he retired with 28 years of service in 1982. After his retirement, he moved back to Jefferson County where he built his dream home residing there for 35 years. During this time, he and his brother took over his father’s business, Gordy Sidetrack, where he worked for over 24 years. Because of his failing health, he moved to Grovetown two months ago to be near his daughter. Tom enjoyed golfing and sports, and was an avid fan of Braves baseball and Georgia Bulldogs football—GO DAWGS. A voracious reader, he was a lifelong learner. Other hobbies and activities included wood-working—his craftmanship and artisanship were exquisite and beautiful—gardening, and working on and being on his tractor. A devoted husband and father, he loved his family unconditionally. At a young age, Tom acknowledged Jesus but it was at the age of 33 that he had a real encounter with Him and had a true salvation experience after which he was a changed man with a deep, abiding relationship with Jesus. He was a member of New Life for 13 years and past members of Wadley Methodist Church, Waldens United Methodist Church and Wrens Baptist Church. His concern for people of all ages, ethnicity, race, and income-levels was unparalleled. His ministries included a 25-year prison ministry, a kid’s ministry at New Life, serving food to and meeting other needs of the homeless, and international mission work. Tom exemplified Christ in his everyday life and gave Him the glory for everything. He not only talked the talk, but he walked the walk—everyone who had the privilege of meeting and knowing Tom felt his love for them. Having lived a full life, Tom has now been welcomed home with “Well done, thou good and faithful servant”. Other survivors include two children, James S. Gordy (Sudie Jane) and Sonya Gordy Bearden; two brothers, Lyman Gordy (Jenny) and Colin Gordy (Linda); six grandchildren, Kayla Beth Gordy, Grigsby Gordy, Wesley McDonald, Jarrett McDonald, Sarah McDonald and Jaycob Bearden; nieces, nephews, church family and a multitude of friends. The family will receive friends at the James Funeral Home of Wrens, GA from 5:00–7:00PM Tuesday, December 26, 2017. The family respectfully requests that in lieu of flowers, memorial contributions be made to New Life, ATTN: Carrie Sisler, 250 Bobby Jones Expressway, Augusta GA 30907 to assist in providing for families in need. James Funeral Home, 630 North Main St., Wrens, GA 30833 is in charge of the funeral services for Mr. James Thomas “Tom” Gordy. This announcement is made on behalf of the family by the Freeman Harris Funeral Home.

The family of Mr. James Thomas "Tom" Gordy created this Life Tributes page to make it easy to share your memories.

Send flowers to the Gordy family.