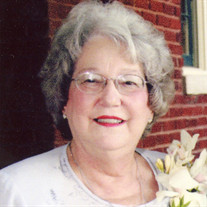 Mrs. Jane Louise Venable Lawhon, age 82 of Rockmart passed away Thursday, June 6, 2019. Mrs. Lawhon was born April 10, 1937 in Roanoke, Alabama, daughter of the late William C. Venable and the late Lillian Inez Phillips Venable. She was also preceded in death by a sister, Lissa Handley also of Roanoke, Alabama. Jane worked as a middle school teacher in Columbus, Georgia, where she met her husband, Bob. In 1968, they moved to Rockmart where she had been a member of the Rockmart Presbyterian Church for over 50 years. Jane devoted her time to being a wife and mother and being active in her church. Jane taught Sunday School for 45 years, from children to young married couples to all adults. She sang alto in the choir, was president of the women of the church, helped with Vacation Bible School, Women’s Morning Circle, and the biennial Christmas live nativity the church performs for the community, and served as an Elder. Aside from church activities, Jane enjoyed college football, reading, collecting pottery, and traveling with Bob and with friends. She easily made friends and enjoyed socializing with Rockmart friends, as well as Roanoke friends she stayed in touch with her entire life. She had a reputation as an excellent cook and could be counted on to provide a meal or dessert for any special event or time of need. She had a written cookbook that is full of her tried and true recipes that her family will continue to enjoy. She was always happy to share her recipes with anyone who asked. Her favorite role in life was grandmother and she was active in their lives as they’ve grown up. Survivors include her husband of 56 years, Robert "Bob" Lawhon, Sr. of Rockmart to whom she was married June 16, 1963; three children, James Lawhon of Lawrenceville, Lillian Nipp (Randy) of Cartersville, and Robert Lawhon, Jr. of Atlanta; three grandchildren, Katie Nipp, Rachel Nipp, and Gibson Lawhon all of Atlanta; sister-in-law, Joyce Gill of Woodbury; as well as several nieces and nephews. Funeral services for Mrs. Lawhon will be held on Sunday, June 9, 2019 at 2:00 p.m. at the Rockmart Presbyterian Church with Rev. Maryellen Hittel officiating. Interment will follow in the family lot of Rose Hill Cemetery. After the interment, the family will return to the church where they will receive family and friends. Mrs. Lawhon will lie in state at the church on Sunday prior to the service from 1:00 p.m. until the funeral hour. The following gentlemen will serve as pallbearers: Mike Bell, Marlon Briscoe, James Gordy, Dana McCourt, Mike Streetman and Raymond Moody. In lieu of flowers, memorial donations may be made to the Rockmart Presbyterian Church, P. O. Box 226, Rockmart, GA 30153 or St. Jude Children’s Research Hospital, 501 St. Jude Place, Memphis, TN 38105-9959 or online at don[email protected] Freeman Harris Funeral Home is in charge of the funeral services for Mrs. Janes Louise Venable Lawhon.

The family of Mrs. Jane Venable Lawhon created this Life Tributes page to make it easy to share your memories.

Send flowers to the Lawhon family.