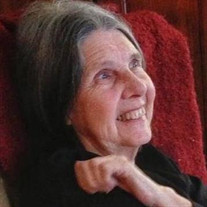 Mrs. Jeanette Rutledge Smith, age 84 of Cedartown passed away Thursday, September 6, 2018. Mrs. Smith was born June 2, 1934 in Cedartown, daughter of the late John Fulton Rutledge and the late Pearl Lee Pitts Tanner. She was the salutatorian of the Cedartown High School Class of 1952 and was a member of the Euharlee Primitive Baptist Church. During her career she had many various jobs outside the home, but always preferred the title of homemaker. She was preceded in death by her husband, Eugene “Gene” Smith on January 10, 2001. Survivors include a daughter and son-in-law, Andrea and Bruce Helmes of Cedartown; two sons and daughters-in-law, Marty and Sandra Smith of Woodstock and Greg and Tai Smith of Huntsville, AL; two sisters and a brother-in-law, Norma Jean Terrell and Sue and Tommy Pilgrim of Cedartown; brother and sister-in-law, Louis and Ann Rutledge of Cedartown; her “perfect ten” grandchildren, Melody, Maggie, Caleb, Ella, Elijah, Bruce, Scott, Kyle, Michael and Rachel; and eight great-grandchildren. Funeral graveside and interment services for Mrs. Smith will be held on Saturday morning, September 8, 2018 at 10:00 a.m. in the family lot of the Hills Creek Baptist Church Cemetery with Brother Marty Smith officiating. The family has requested that flowers be omitted and memorial donations be made to a Primitive Baptist Church of your choice in memory of Mrs. Smith. Freeman Harris Funeral Home is in charge of the funeral service for Mrs. Jeanette Rutledge Smith.

The family of Mrs. Jeanette Rutledge Smith created this Life Tributes page to make it easy to share your memories.

Send flowers to the Smith family.