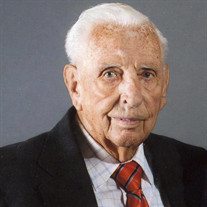 Mr. Joel Parrish Bowers, age 93 of Rockmart passed away Saturday, February 18, 2017. Mr. Bowers was born April 29, 1923 in Crossville, Alabama, son of the late Frank H. Bowers and the late Minnie Yancey Bowers. He was a veteran of the United States Army having served during World War II from 1943-1946. Following his military service, he attended Snead Junior College and later received his mechanical engineering degree from Auburn University. Mr. Bowers retired from Goodyear in 1985 as a mechanical engineer and also worked a number of years for Forsyth Realty and at the Cedartown Walmart in the paint and hardware department. He was a member of the Rockmart Kiwanis Club where he served as a past president, was a Key Club advisor and for many years was a faithful member of the First United Methodist Church of Rockmart. Mr. Bowers was presently a member of the Victory Baptist Church. He loved to work and spend time in his garden. Mr. Bowers was preceded in death by his wife, Agnes Deems Bowers on February 17, 2009; his former wife, Mary Rickles Bowers to whom he was married twenty-one years; sister, Amie Bowers Dewberry; and a brother, Hanniel Bowers. Survivors include a son, Joel “Ricky” Bowers and his wife Pam of Rockmart; two step-daughters, Donna Gamel and Karen Anderson both of Rockmart; eight grandchildren and sixteen great-grandchildren also survive. Funeral services for Mr. Bowers will be held on Thursday, February 23rd at 11:00 a.m. in the Victory Baptist Church with Rev. Barry Snapp officiating. Interment services will follow in the family lot of Polk Memory Gardens with American Legion Brown-Wright Post #12 Honor Guard in charge of the military graveside rites. Mr. Bowers will lie in state at the church on Thursday prior to the service between the hours of 9:30 and 10:30 a.m. The following gentlemen will serve as pallbearers: Fain Deems, Ben Bowman, Alton Deems, Lee Simpkins, John Forsyth, Gary Forsyth, Johnny Holland and Torey Wright. Honorary pallbearer will be Lee Forsyth. The family will receive friends at the funeral home on Wednesday evening, February 22nd between the hours of 6:00 and 9:00 p.m. In lieu of flowers, memorial contributions may be made to the Victory Baptist Church, Lasting Legacy Building Fund, 15 Hendrix Road, Rockmart, GA 30153 in memory of Mr. Bowers. Freeman Harris Funeral Home is in charge of the funeral services for Mr. Joel Parrish Bowers.

Mr. Joel Parrish Bowers, age 93 of Rockmart passed away Saturday, February 18, 2017. Mr. Bowers was born April 29, 1923 in Crossville, Alabama, son of the late Frank H. Bowers and the late Minnie Yancey Bowers. He was a veteran of the United... View Obituary & Service Information

The family of Mr. Joel P. Bowers created this Life Tributes page to make it easy to share your memories.

Send flowers to the Bowers family.