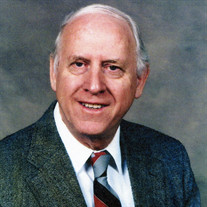 Mr. Joel William Goldin, Sr., age 93 of Rockmart, Georgia passed away Sunday, May 7, 2017. He was born January 15, 1924 in Rockmart, son of the late Dr. Robert Battey Goldin and Estelle McBrayer Goldin. It was a special day because his daddy delivered him. Joel grew up in Rockmart and attended Rockmart High School where he played quarterback during his junior and senior year. He was a World War II veteran having served in the Army Air Corp from 1943-1946. He fought in the Pacific Theatre with a B-24 Bomber crew as an armorer gunner. The bomber was named “Best We Do” by the crew. They helped in the liberation of the Philippine Islands very well indeed. Joel graduated from Pharmacy School at the University of Georgia. He began a partnership and pharmacy business in 1955 with Jack M. Selman called “J&J Drugstore”. He later bought the business working alongside his wife, Ruth, before selling it in 1982. He worked at Rite Aide Pharmacy in Rockmart until retiring. He was a long-time member of the First Baptist Church of Rockmart. He served as a deacon, as well as chairman of the building committee at one time. He was also active in the community. He served on the Rockmart City Council and was president of the Rotary Club 1972-1973. He also served on the board of directors for the Chamber of Commerce, the Rockmart-Aragon Hospital and Rockmart Housing Authority. Joel and Ruth enjoyed traveling to the 5th Bomb Group Reunions during their retirement and enjoyed their antique store. He was a good father and a good friend to many people. In addition to his parents, he was preceded in death by his wife, Ruth Eva White Goldin after 62 years of marriage; brothers, R. B. Goldin, Dr. Harold Goldin and Jimmy Goldin; and a sister, Mary Beth Hogg. Survivors include three children, Jeanette Graves and her husband Ed, Anna Goldin and Joel Goldin, Jr.; five grandchildren, Ryan Harris, Bill Graves, Bradley Graves, Kyle Goldin and Ashley Astin; and two great-grandchildren, Kara Graves and Carter Graves who all called him Pa Pa Joel. Memorial services for Mr. Goldin will be held on Thursday, May 11, 2017 at 2:00 p.m. in the First Baptist Church with Dr. Bill Heaton and Rev. Jason Odom officiating. Inurnment services will follow in the family lot of Rose Hill Cemetery with American Legion Brown-Wright Post #12 Honor Guard in charge of military graveside rites. The family will receive friends in the Great Room of the First Baptist Church on Thursday prior the service from 12 noon until 1:30 p.m. Freeman Harris Funeral Home is in charge of the memorial service for Mr. Joel William Goldin, Sr.

Mr. Joel William Goldin, Sr., age 93 of Rockmart, Georgia passed away Sunday, May 7, 2017. He was born January 15, 1924 in Rockmart, son of the late Dr. Robert Battey Goldin and Estelle McBrayer Goldin. It was a special day because his daddy... View Obituary & Service Information

The family of Mr. Joel William Goldin, Sr. created this Life Tributes page to make it easy to share your memories.