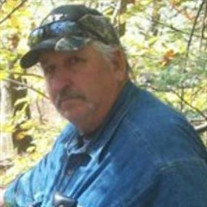 Mr. Johnny Wayne Coker age 74 of Rockmart passed away Saturday, November 17, 2018. Mr. Coker was born October 3, 1944 son of the late Renae Coker and the late Nellie Massey Coker. He attended Rockmart High School and was of the Baptist faith. Johnny was a veteran of the United States Navy having served during the Vietnam War and was a member of the American Legion Brown-Wright Post 12. He was a hard worker who retired from the EBY Brown Company with over 30 years of service and didn’t like to owe anybody. He loved the outdoors, especially deer hunting. Of all sports his favorite was golf, but his greatest love was for his family. In addition to his parents, he was preceded in death by his wife, Brenda Fay Tucker Coker on March 17, 2017; a daughter, Johnnie Lorraine Coker Riley in 2002; and a sister, Elizabeth Cole Reed. Survivors include two daughters, Jennifer Coker Bentley and her husband Adam of Rockmart and Jaclyn Yvonne Coker Myrick and her husband Corey of Cedartown; six grandchildren, Zachary Parish, Michael Bentley, Megan Bentley, Faith Cheeks, Andrew Cheeks and Braci Myrick; a great-granddaughter, Amelia Robinson; numerous nieces and nephews. Funeral services will be held on Tuesday, November 20, 2018 at 2:00 p.m. in the New Prospect Baptist Church with Rev. Mark Purser and Rev. Barry Snapp officiating. American Legion Brown-Wright Post 12 Honor Guard will provide military honors. Mr. Coker will lie in state at the church on Tuesday prior to the funeral service from 1:00 p.m. until the funeral hour. The following gentlemen will serve as pallbearers: Keith Cole, Dan Cole, Chris Cole, Chad Cole, Phillip Cole, Cecil Williams and Jeremy Tucker. Honorary pallbearer will be Larry Cole. The family will receive friends at the funeral home on Monday, November 19, 2018 between the hours of 5:00 and 8:00 p.m. In lieu of flowers, the family requests that memorial contributions be made to Heyman Hospice, 420 E. Second Ave., Rome GA 30161 in memory of Mr. Coker. Freeman Harris Funeral Home is in charge of the funeral service for Mr. Johnny Wayne Coker.

The family of Mr. Johnny Wayne Coker created this Life Tributes page to make it easy to share your memories.