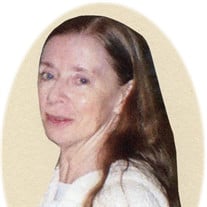 Ms. Joy Linda Blais, age 70 of Aragon, Georgia formerly of New Bedford, Massachusetts passed away Wednesday, February 22, 2017. Ms. Blais was born June 25, 1946 in Fall River, Massachusetts, daughter of the late Gerard Joseph Blais and Alice Clementine Mortron Blais. She was a homemaker and of the Protestant faith. Ms. Blais moved to Aragon in January to live with her daughter due to declining health. She was a photographer as well as a published writer. She loved animals, crafts, sewing, reading, taking care of children and was always looking for ways to help people or animals whenever she had the opportunity. Ms. Blais was known for her compassion, understanding, empathy and kindness and for always putting the needs of others first. She was preceded in death by her son-in-law, David Alan Holland on April 2, 2016; and a brother, John “Sonny” Blais. Survivors include a daughter, Wendy (Blais-Meeker) Holland of Aragon; a son, Joseph Gerard Blais of Las Vegas, Nevada; and two grandchildren, Lily Blais and Raymond Holland. Funeral services for Ms. Blais will be held on Saturday, February 25th at 2:00 p.m. at Hillside Fellowship with Pastor Steve Arrington officiating. The eulogy and music will be provided by her daughter, Mrs. Wendy Holland. Interment services will follow in the family lot of the Sardis Congregational Methodist Church Cemetery. Ms. Blais will lie in state at the church on Saturday prior to the service from 1:00 p.m. until the funeral hour. The following gentlemen will serve as pallbearers: Randy Moon, Steven Moon, Drew Moon, and Matt Johnson. The family will receive friends at the funeral home on Friday evening, February 24th between the hours of 6:00 and 8:00 p.m. Freeman Harris Funeral Home is in charge of the funeral service for Ms. Joy Linda Blais.

The family of Mrs. Joy Linda Blais created this Life Tributes page to make it easy to share your memories.

Send flowers to the Blais family.