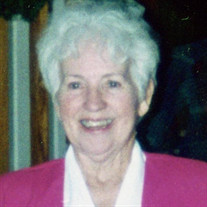 Mrs. Kathryn Mobley Yancey, age 94 of Rockmart passed away Sunday afternoon, August 20, 2017 at the Christian City Convalescent Center of Union City. Mrs. Yancey was born February 24, 1923 in Floyd County, daughter of the late Henry Mobley and the late Ellie Jones Mobley. She was a homemaker and an active member of the First Baptist Church of Rockmart for over 50 years. For many years, she worked for the Polk County Board of Elections as the coordinator for Rockmart. She was an avid golfer and a Life Master bridge player. She was preceded in death by her husband, John O. Yancey on September 15, 2005; two sisters and three brothers. Survivors include a daughter, Mary Ann Yancey Pike of Villa Rica; son, John Charles Yancey and his wife Kathy of Snellville; four grandchildren, Laura Upton Edwards, Bill C. Upton, Jr., Lily Yancey Miller and Ian Yancey; seven great-grandchildren and one great-great-granddaughter. Funeral services for Mrs. Yancey will be held on Wednesday, August 23, 2017 at 3:00 p.m. in the Great Room of the First Baptist Church with Rev. Jason Odom and Rev. John Cowan officiating. Interment services will follow in the family lot of Rockmart Memorial Gardens. The following gentlemen will serve as pallbearers: Tommy Edwards, Ben Marlow, Malachi Ray, Ian Yancey, Nevin Miller and Jeff Lane. The family will receive friends in the Great Room of the First Baptist Church on Wednesday prior to the funeral service from 1:00 p.m. until the funeral hour. Floral donations will be accepted or those wishing to do so, may make memorial contributions to the First Baptist Church, Whole Heart Building Fund, P. O. Box 388, Rockmart, GA 30153 in memory of Mrs. Yancey. Freeman Harris Funeral Home is in charge of the funeral services for Mrs. Kathryn Mobley Yancey.

The family of Mrs. Kathryn Mobley Yancey created this Life Tributes page to make it easy to share your memories.

Send flowers to the Yancey family.