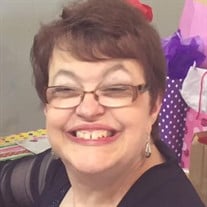 Miss Kimberly Leigh “Kim” Williams, age 52 of Rockmart passed away Tuesday morning, December 4, 2018. Kim was born March 6, 1966 in Waycross, daughter of Linda Pinkard Williams and the late Hugh Don Williams. Survivors include her mother, Linda Pinkard Williams; sister and brother-in-law, Kristy and Greg Gober; brother and sister-in-law, David and DeAnna Williams; three nieces, Olivia Gober, Sarah Williams and Emma Williams; and two nephews, Ethan Gober and Isaac Gober all of Rockmart. Miss Kim Williams was a very special person and was loved by everyone who knew her. Kim was a member of the Victory Baptist Church of Rockmart where she had numerous friends. The ladies of the church held an extra special place in Kim’s heart and frequently showered her with gifts and hugs which Kim welcomed each and every time she saw them. Kim served as a volunteer at First Baptist Church of Rockmart nursery school for many years where Mrs. Bobbie Lumpkin served as director. Kim loved the children (and Miss Bobbie) and looked forward to being with them every day. Family meant everything to Kim. Her mother, brother and sister were continual sources of support and care for Kim. She loved her sister-in-law, brother-in-law, three nieces and two nephews dearly and enjoyed attending birthday parties and family gatherings with aunts, uncles and numerous cousins. Enjoying the simple things in life is what Kim did best. Eating at El Nopal and Bar L, getting manicures, putting together puzzles, writing and making lists and watching TV were some of her favorite activities – especially if Chip and Joanna Gaines or Steve Harvey were on TV. In her own way, Kim Williams captured the hearts of all who knew her with her infectious smile, deep hugs and joyful laughter. She will be greatly missed by all who knew her. Funeral services for Kim will be held on Friday, December 7, 2018 at 1:00 p.m. in the Victory Baptist Church with Rev. Barry Snapp officiating. Interment services will follow in the family lot of Bellview Baptist Church Cemetery. Serving as pallbearers will be: Ethan Gober, Devin Lester, Russell Head, Dalton Head, Todd Akins and Scott Akins. The family will receive friends at the funeral home on Thursday, December 6, 2018 between the hours of 5:00 and 8:00 p.m. Floral donations will be accepted or memorial donations may be made to the Victory Baptist Church, Lasting Legacy Building Fund, 15 Hendrix Rd., Rockmart GA 30153 in memory of Kim. Freeman Harris Funeral Home is in charge of the funeral services for Miss Kimberly Leigh “Kim” Williams.

The family of Miss Kimberly Leigh "Kim" Williams created this Life Tributes page to make it easy to share your memories.

Send flowers to the Williams family.