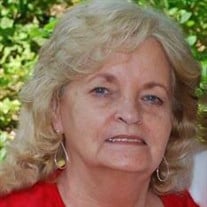 Ms. Linda Locklear Jones, age 71, of the Yorkville Community, passed away on Friday, April 17, 2015. Ms. Jones was born on January 5, 1944 in Dallas, Georgia, daughter of the late Jessie Ray Locklear and the late Elender Mae Bowman Locklear. She was a hairstylist for many years, retired from Honda Lock and was a member of Willow Springs Baptist Church. In addition to her parents, she was preceded in death by her brother, Mr. Dennis Locklear; and her sister-in-law, Mrs. Diane Locklear. Ms. Jones loved working in her flower garden and woodworking, but her greatest love by far was her family. She is survived by her fiancé, Gene Hicks of Yorkville; sons, Tracy “Scott” Jones, Kenneth “Greg” Jones, and Jeffrey “Blake” Jones, and his wife, Tara all of Yorkville and Terry “Wade” Jones and his wife Becky of Aragon; daughters, Angela “Robin” Hartley and her husband Ricky of the Union community, Robin’s former husband and father of her children, Johnny Puckett of the Beulah community, Karen “Lisa” Brown and her husband John of Rockmart and Amy Barron and her husband Mark of Yorkville; brothers, Edward Locklear and Tim Locklear both of Rockmart, Larry Locklear and his wife Diane of Yorkville, Silas Locklear and his wife Debbie of Aragon, Travis Locklear and his wife Connie of Haralson County; Linda’s former husband and father of her children, Donald Jones; 23 grandchildren and 23 great-grandchildren also survive. Funeral services for Ms. Jones will be held on Tuesday, April 21st at 2:00 p.m. in the chapel of the Freeman Harris Funeral Home with her grandson, Rev. Tyler Barron and her nephew, Rev. Sydney Locklear officiating. Interment services will follow in the family lot of the Yorkville Cemetery. The following grandsons will serve as pallbearers: Tanner Puckett, Jason Puckett, Daniel Brown, Brett Jones, Justin Jones, Trent Jones, and Wesley Jones. The following gentlemen will serves as honorary pallbearers: Mark Jones, Tim Jones, Jeremy Jones, and Joey McDaniel. The family will receive friends at the funeral home on Monday, April 20th between the hours of 6:00 and 9:00 p.m. Freeman Harris Funeral Home is in charge of the funeral services for Ms. Linda Locklear Jones.

The family of Ms Linda Locklear Jones created this Life Tributes page to make it easy to share your memories.

Send flowers to the Jones family.