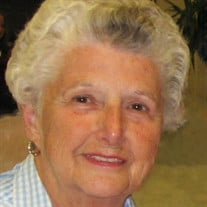 Mrs. Martha Grace Mosley Morris, age 86 of Aragon passed away Wednesday evening, September 7, 2016. Mrs. Morris was born August 22, 1930 in Polk County, daughter of the late John Harvey Mosley and the late Mary Fannie Stephenson Mosley. She was a member of the New Prospect Baptist Church for 70 years and retired in 1993 from her last career at Murata Erie Corporation. Prior to Murata, Mrs. Morris was a florist as well as holding numerous other occupations. She loved all sports and played basketball as a young woman. Mrs. Morris was an avid fan of the Atlanta Braves and the Atlanta Falcons. She loved to cook and her nieces and nephews would say a bologna sandwich tasted better at her house than anywhere else. If you visited her home you had to have something to eat and drink, but her greatest love was her family. She was preceded in death by her husband, James Floyd “Shorty” Morris on February 23, 2010; son, Robert Harvey Morris; and a great-great-grandson, Kyle Lynn Griffin. She was the youngest of nine children, having also been preceded by five sisters, Agnes, Lemma, Vera, Mary and Doris and three brothers, Sterling, Gordon and Jesse. Survivors include a daughter, Carelene Griffin and her husband LaMahta of Rome; three sons, Larry Morris and his wife Susan and Donald Morris and his wife Robin all of Rockmart and Keith Morris of Nashville, TN; ten grandchildren, twenty-eight great-grandchildren and four great-great-grandchildren also survive. Funeral services for Mrs. Morris will be held on Saturday, September 10th at 2:00 p.m. in the chapel of the Freeman Harris Funeral Home with Rev. Barry Snapp and Rev. Owen (Bud) Davis, Jr. officiating. Remarks and eulogies will be given by Mr. Larry Morris and Mr. Melton Moss. Interment services will follow in the family lot of the Aragon Cemetery. The following gentlemen will serve as pallbearers: Phil Blissitt, Casey Childers, Heath Morris, Dalton Morris, Chris Childers and Randy Cook. The family will receive friends at the funeral home on Friday evening, September 9th between the hours of 6:00 and 8:00 p.m. Freeman Harris Funeral Home is in charge of the funeral services for Mrs. Martha Grace Mosley Morris.

The family of Mrs. Martha Grace Mosley Morris created this Life Tributes page to make it easy to share your memories.

Send flowers to the Morris family.