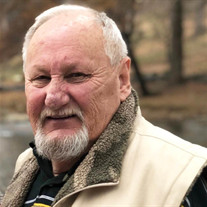 Mr. Maynon Eugene Childers, age 68 of Aragon, passed away Friday, January 31, 2020. Mr. Childers was born August 10, 1951 in Cedartown, son of the late Sam Childers and the late Sarah Carter Childers. He was owner and operator of Childers Plumbing for 40 years and of the Baptist faith. Mr. Childers enjoyed NASCAR, westerns and Elvis. He loved to ride his Harley, but his greatest love was his family, children and great-grandchildren. In addition to his parents, he was preceded in death by a son, Jason Dennis Watkins; and a sister, Faye Streetman. Survivors include his wife, Linda Holcombe Childers of Aragon to whom he was married November 19, 1982; two daughters and sons-in-law, Dawn and Doug Lewis of Monticello and Heather and Brandon Frodge of Brookhaven; son and daughter-in-law, Brett and Celie Childers of Aragon; sister and brother-in-law, Judy and Danny Strickland of Cedartown; brother and sister-in-law, Judson and Jennifer Childers of Rockmart; seven grandchildren and two great-grandchildren. Funeral services for Mr. Childers will be held on Sunday, February 2, 2020 at 2:00 p.m. in the chapel of the Freeman Harris Funeral Home with Rev. Ed Streetman officiating. Interment services will follow in the family lot of Rockmart Memorial Gardens. The following gentlemen will serve as pallbearers: David Childers, Drew Childers, Casey Childers, Toby Folds, Kevin Robinson and David Evans.’ The family will receive friends at the funeral home on Saturday, February 1, 2020 between the hours of 6:00 and 9:00 p.m. Freeman Harris Funeral Home is in charge of the funeral service for Mr. Maynon Eugene Childers.