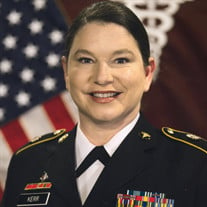 Sgt. Michelle Williams Kerr, age 40 of Tacoma, Washington, formerly of Rockmart, Georgia, passed away Friday, May 17, 2019 at the Madigan Army Medical Center located on Joint Base Lewis-McChord. Michelle was born January 18, 1979 in Rome, Georgia, daughter of Robert Grady “Bob” Williams and Debbie Gamel Williams. Since 2009, she had faithfully served our country in the United States Army and in 2013 she earned her LPN Nursing Degree from Walter Reed Army Medical Center in Washington, D.C. At the time of her death, she was stationed at the Madigan Army Medical Center, working in the maternity ward. Michelle loved her animals, the beach, friends and family, camping, hiking and Dr. Pepper. Survivors include her husband, SFC Michael “Mike” Kerr of Tacoma, Washington, to whom she was married January 19, 2016, who also faithfully serves in the United States Army; son, T. J. Cusyck of Rockmart; step-son, Will Kerr of Madison; mother, Debbie Williams of Rockmart; father and step-mother, Bob and Lisa Williams of Rockmart; brother, Rob Williams and his wife Angela of Cedartown; step-brother, Ryan Pyle and his wife Candace of Yorkville; step-sister, Erica Williamson of Rockmart; and two nieces, Madison and Ashlyn Williams. Funeral services for Sgt. Kerr will be held on Saturday, June 1, 2019 at 2:00 p.m. in the chapel of the Freeman Harris Funeral Home with Army Chaplain Jason Nobles officiating. Military Honors will be provided by the United States Army Honor Guard. The family will receive friends at the funeral home on Friday evening, May 31, 2019 between the hours of 6:00 and 9:00 p.m. Freeman Harris Funeral Home is in charge of the funeral service for Sgt. Michelle Williams Kerr.

The family of Sgt. Michelle Williams Kerr created this Life Tributes page to make it easy to share your memories.

Send flowers to the Kerr family.