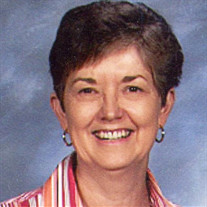 Mrs. Nellie Faye Green Lankford, age 72 of Rockmart, passed away Sunday, June 23, 2019. Mrs. Lankford was born September 18, 1946 in Rome, daughter of the late Harvey Green and the late Corine Ferguson Green. She grew up in the Taylorsville area and was a 1964 graduate of Rockmart High School. Faye was a member of the Fairview Baptist Church. She was employed with the BellSouth Company in Gadsden, Alabama, where she retired following 35 years of service. During those years in Gadsden, she met the love of her life, Hiram Lankford, and they were married on February 17, 1995. Following retirement, she and Hiram moved back to her childhood home, Polk County, Georgia. She enjoyed flowers and working in her yard, but her greatest joy was her grandchildren. In addition to her parents, she was preceded in death by two brothers, James Green and Jerry Green. Survivors include her husband of 24 years, Hiram Lankford of Rockmart; son and daughter-in-law, Andy and Donna Turner of Spartanburg, South Carolina; sister, Hazel Powell of Rockmart; and three grandchildren, Tyler Wade, Austin Turner and Abigail Turner. Funeral services for Mrs. Lankford will be held on Tuesday, June 25, 2019 at 11:00 a.m. in the chapel of the Freeman Harris Funeral Home with Rev. Scott Shepard officiating. Interment services will follow at 1:00 p.m. (Central Daylight Time) in the Williams Southside Memorial Park of Rainbow City, Alabama. The following gentlemen will serve as pallbearers: Austin Turner, Tyler Wade, Clay Barnette, Mason Barnette, Jason Brand, Randy Barnette and Jesse Powell. The family will receive friends at the funeral home on Monday, June 24, 2019 between the hours of 6:00 and 8:00 p.m. Freeman Harris Funeral Home is in charge of the funeral services for Mrs. Nellie Faye Green Lankford.

The family of Mrs. Nellie Faye Green Lankford created this Life Tributes page to make it easy to share your memories.

Send flowers to the Lankford family.