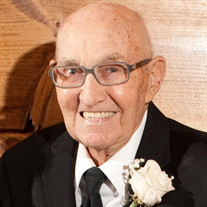 Mr. Raidon M. Moates, age 90 of Aragon, Georgia passed away on Saturday, April 25, 2015. Mr. Moates was born on May 26, 1924 in Polk County, son of the late Monroe Dock Moates and the late Delia Gober Moates. He was the eldest member of the Live Oak Baptist Church and was owner and operator of Moates Construction. Mr. Moates was a veteran of the United States Army having served during World War II. He was a member of the Brown-Wright American Legion Post #12 and was a member of the Aragon Davitte Masonic Lodge #513 F&AM. He had a great love for his grandchildren and they enjoyed his snow making. Mr. Moates was preceded in death by nine siblings. Survivors include his wife, Ruby Busby Moates of Aragon to whom he married May 5, 1946; daughter, Brenda Moates Cagle and her husband Jarrell of Rome; son, Ted Moates and his wife Chris of Aragon; sister, Margie Cramer of Orlando, Florida; brother, Gene Moates of Aragon; four grandchildren, Ronald Cagle and his wife Amey, Angie Cagle, Josh Moates and his wife Kelly and Kathryn Moates; and two great-grandchildren, Raiden Cagle and Emery Lang also survive. Funeral services for Mr. Moates will be held on Monday, April 27th at 3:00 p.m. in the chapel of the Freeman Harris Funeral Home with Dr. Jeff Dabbs and Rev. Anthony Osborn officiating. Interment services will follow in the family lot of the Live Oak Baptist Church Cemetery with Brown-Wright American Legion Post #12 Honor Guard in charge of military graveside rites. The following gentlemen will serve as pallbearers: Jimmy Hughes, Jerry Dabbs, Gerald Moates, David Holland, Danny Smith, Josh Moates and Ronald Cagle. The family will receive friends at the funeral home on Sunday evening, April 26th between the hours of 6:00 and 8:00 p.m. Floral donations will be accepted or those wishing to do so, may make memorial contributions to the Live Oak Baptist Church, P. O. Box 202, Aragon, GA 30104 in memory of Mr. Moates. Freeman Harris Funeral Home is in charge of the funeral services for Mr. Raidon M. Moates.

Mr. Raidon M. Moates, age 90 of Aragon, Georgia passed away on Saturday, April 25, 2015. Mr. Moates was born on May 26, 1924 in Polk County, son of the late Monroe Dock Moates and the late Delia Gober Moates. He was the eldest member of... View Obituary & Service Information

The family of Mr. Raidon M. Moates created this Life Tributes page to make it easy to share your memories.

Send flowers to the Moates family.