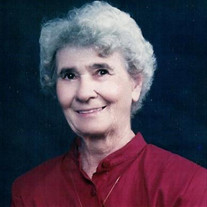 Mrs. Ruby Florence Bright Yates passed away Wednesday, June 20, 2018 in Rome, GA at the age of 99 years. She was born on May 28, 1919 in Borden Springs, AL to the late Thomas F. Bright and the late Sarah Louella Upchurch Bright. She grew up in Cedartown, GA, one of six daughters and one son. She married E. Wayne Yates on December 24, 1938. They were the parents of five children. The first daughter died at birth. Survivors include four children, Jerry (Alicia) Yates of Fayetteville, Sandra Yates Rogers of Woodstock, Gayle (Scott) Gray of Humble, TX and Jimmy W. Yates of Citrus Springs, FL. She had nine grandchildren, nine great-grandchildren and six great-great grandchildren. In addition to her parents, she was preceded in death by her husband, Wayne Yates on September 9, 1984; five sisters, Mae McAdams, Edie Thomason, Joyce Ivey, Dot Dill and Flora Belle Knight; a brother, Elbert Bright; daughter-in-law, June Ellen Yates; and two grandchildren. Ruby is remembered for her quiet, sweet manner and her love for others. She was never judgmental and was kind to all she met. She and her siblings were known and admired for their love shone to each other, with never an unkind remark said to the other. She was a loving mother whose goal in life was to care for them. She loved to cook and she and Wayne hosted many fish fries and reunions at their Lake Doreen home in Rockmart. She was known in Rockmart for her bountiful strawberry patch and provided the local supermarket with many baskets of fresh berries. Ruby attended the Cedartown Church of God. She suffered for over fourteen years with Alzheimer’s disease. The family requests that instead of flowers, donations be made to the Alzheimer’s Association or to another charity of your choice in memory of Mrs. Yates. Funeral graveside and interment services for Mrs. Yates will be held on Sunday, June 24, 2018 at 3:00 p.m. in the family lot of Rose Hill Cemetery with Rev. Owen (Bud) Davis, Jr. officiating. The family will receive friends at the funeral home on Sunday prior to the service from 1:30-2:30 pm. Freeman Harris Funeral Home is in charge of the funeral graveside service for Ruby B. Yates.

Mrs. Ruby Florence Bright Yates passed away Wednesday, June 20, 2018 in Rome, GA at the age of 99 years. She was born on May 28, 1919 in Borden Springs, AL to the late Thomas F. Bright and the late Sarah Louella Upchurch Bright. She grew up... View Obituary & Service Information

The family of Mrs. Ruby Bright Yates created this Life Tributes page to make it easy to share your memories.

Send flowers to the Yates family.