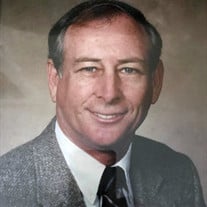 Mr. Samuel Otterson Jones, III, 79 of Rockmart, GA passed away Wednesday, December 18, 2019 at The Bridge at Ooltewah, Tennessee. He was born February 2, 1940 in Atlanta, Georgia, the son of the late Samuel Otterson Jones, Jr and the late Mrs. Mildred Smith Jones. He retired from U.S. Steel where he was a supervisor and was a property manager in Rockmart. He was a member of the First United Methodist Church of Rockmart. He received his Bachelor of Science from Georgia Tech. In addition to his parents he was preceded in death by his brother, Thomas Carter Jones. Survivors include his son and daughter-in-law, Dr. Samuel O. Jones, IV and Leslie Jones of Chattanooga, TN; sister and brother-in-law, Patricia Jones Gore and Fred Gore of Aragon; and 3 grandchildren, Quinten Samuel Otterson Jones, Lucas Bryson Jones and Jacob Sawyer Jones. The family will receive friends at Freeman Harris Funeral Home, Sunday, December 22, 2019 from 2:00 PM until 3:00 PM. Memorial Services will be conducted Sunday, December 22, 2019 at 3:00 PM from the Chapel of Freeman Harris Funeral Home with Rev. Thomas G. Hall officiating and Dr. Sam Jones, IV providing the eulogy. In lieu of flowers, contributions may be made to the Winship Cancer Institute of Emory University, Development Office, 1762 Clifton Road, Suite 1400, Atlanta, GA 30322, or https://winshipcancer.emory.edu/support-winship/give/index.html. Freeman Harris Funeral Home of Rockmart is in charge of the memorial services for Mr. Samuel Otterson Jones, III.

The family of Mr. Samuel Otterson Jones, III created this Life Tributes page to make it easy to share your memories.

Send flowers to the Jones, family.