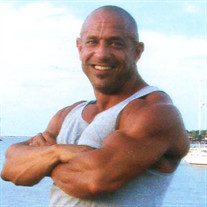 Mr. Stephen “Steve” Chad Cowan, age 50 of Cedartown, the Antioch Community, passed away Sunday, May 12, 2019 after a brief illness. Mr. Cowan was born November 5, 1968 in Austell, son of Wanda June Coker Hyde and the late William Stephen “Steve” Cowan. He was a 1986 graduate of Lithia Springs High School and a member of the Second Baptist Church of Rockmart. Body building was his life, having been a personal trainer and owner of Universal Fitness of Hiram. He enjoyed hunting and fishing and was also an artist. Survivors include his wife, Donna Leigh Street Cowan of Cedartown to whom he was married November 11, 2011; five daughters, Jessie Cowan of Rockmart, Lindsay Earwood, Julianna Earwood, Kayla Earwood and Alex Earwood all of Hiram; son, Chase Cowan of Gadsden, AL; mother, Wanda June Hyde and her husband, Robert Smith of Cedartown; brother, William Jason Cowan and his fiancé, Tricia Vo of Cedartown; and grandson, Liam Earwood. Funeral services for Mr. Cowan will be held on Wednesday, May 15, 2019 at 11:00 a.m. in the chapel of the Freeman Harris Funeral Home with Rev. David Warriner officiating. Interment services will follow in the family lot of Antioch Baptist Church Cemetery. The following gentlemen will serve as pallbearers: Chandler Cowan, Tony Cowan, Steve Coley, Tim Boyd and Bill Coker. The family will receive friends at the funeral home on Tuesday, May 14, 2019 between the hours of 6:00 and 8:00 p.m. Freeman Harris Funeral Home is in charge of the funeral services for Mr. Stephen “Steve” Chad Cowan.

The family of Mr. Stephen "Steve" Chad Cowan created this Life Tributes page to make it easy to share your memories.

Send flowers to the Cowan family.