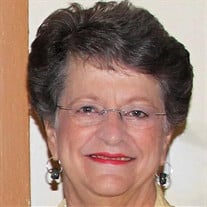 Mrs. Sylvia Randall Pound of Rockmart, passed away peacefully at her home after a prolonged illness on the morning of Thursday, November 22, 2018. Sylvia was born April 2, 1938 in Rome Georgia to the late James Watts Randall, Jr. and Thelma White Randall. After graduating from Rockmart High School in 1956, Sylvia initially attended North Georgia College subsequently graduating from the University of Georgia in 1960. On June 24, 1961, she married the then Second Lieutenant Bruce Wayne Pound, a member of the United States Army, and they started a family as Bruce and Sylvia were stationed around the world, welcoming a son (David Scott) and daughter (Leslie Susan) to their family along the way. Sylvia spent many years as an educator in Bartow and Polk County School systems, retiring in 1998 from Polk School District as the media specialist at Goodyear Elementary School. Sylvia was an active member of her church and community, faithfully serving in the Rockmart Presbyterian Church in the Christmas Pageants, Backpack Ministries, the church choir and also as a church Elder. She particularly enjoyed singing in the Rome Chorus and traveling the world with her friends. Most importantly, Sylvia is a child of God, a firm believer in the Compassion and Saving Knowledge of her Lord, Jesus Christ. Throughout her illness, her strength, honor and grace were displayed daily. Sylvia was predeceased in death by her parents, Jim and Thelma; her husband, Bruce and her infant son, Mark Randall. Sylvia is survived by her sister, Janice Anderson, her son David, David’s wife LeGrand, and their three daughters (Hallie, Madison and LeGrand Salter), and her daughter, Leslie Susan. She is also survived and found great joy in her numerous cousins, nieces, nephews, great-nieces and great-nephews. A celebration of her life and funeral services for Sylvia will be held on Sunday, November 25, 2018 at the Rockmart Presbyterian Church at 2:00pm. Interment will follow at Rose Hill Cemetery. The family will return to the church where they will receive family and friends. Freeman Harris funeral home is in charge of the funeral services for Mrs. Sylvia Randall Pound.

Mrs. Sylvia Randall Pound of Rockmart, passed away peacefully at her home after a prolonged illness on the morning of Thursday, November 22, 2018. Sylvia was born April 2, 1938 in Rome Georgia to the late James Watts Randall, Jr. and Thelma... View Obituary & Service Information

The family of Mrs. Sylvia Randall Pound created this Life Tributes page to make it easy to share your memories.

Send flowers to the Pound family.