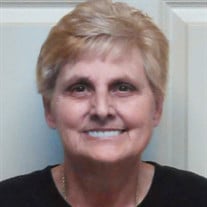 Mrs. Vivian Diane Chafin Wilson, age 61 of Rockmart passed away Monday, January 15, 2018. Mrs. Wilson was born November 15, 1956 in Perry, Georgia, daughter of the late Wyatte Brown Chafin and the late Ina Sue Pierce Chafin. She was of the Baptist faith and a homemaker who loved being with her family. Mrs. Wilson enjoyed watching sports and avidly adored her precious dog, Sarah. She was preceded in death by her husband, James Robert Wilson; two brothers, Jerry Joshua Chafin and Billy Wayne Chafin. Survivors include her goddaughter, Bree Gentry of Taylorsville, GA; four sisters, Sarah Hale of London, KY, Doris Coker and her husband Bobby of Molena, GA, Jeanette Martin and her husband Boyd of Adairsville, GA, and Brenda Ashley of Silver Creek, GA; a brother, Harold Chafin and his wife Shelma of Huntsville, AL; and her longtime companion, Terry Walk Hadfield of Rockmart, GA. A funeral service for Mrs. Wilson will be held on Friday, January 19, 2018 at 7:00 p.m. in the chapel of Freeman Harris Funeral Home with Rev. Owen “Bud” Davis, Jr. officiating. A eulogy will be given by Mr. Terry Walk Hadfield. The family will receive friends at the funeral home on Friday prior to the funeral service between the hours of 5:00 and 6:30 p.m. Freeman Harris Funeral Home is in charge of the funeral service for Mrs. Vivian Diane Chafin Wilson.

The family of Mrs. Vivian Diane Chafin Wilson created this Life Tributes page to make it easy to share your memories.